In today’s craft beer environment, it pays to be a startup.

According to Brewers Association chief economist Bart Watson, breweries founded after 2014 are driving the majority of segment growth. Those breweries collectively added 916,000 barrels to the category in 2017, which represents growth of 52.6 percent versus 2016.

Breweries founded before 2014, however, added 285,000 barrels to the craft segment and collectively grew just 1.3 percent.

Watson, along with BA director Paul Gatza, shared these statistics and other “State of the Industry” figures with thousands of beer industry professionals during Tuesday morning’s General Session at the Craft Brewers Conference in Nashville.

Watson’s advice to some of the newer breweries in the room? Set “realistic expectations.”

“While you’re growing fast now, don’t expect that you’re going to beat the odds when so many older or experienced breweries were not able to,” he said.

During their presentation, Watson and Gatza confirmed growth figures that were released in March — one in eight beers purchased in 2017 came from small and independent brewers. Watson said craft’s 12.7 percent share of U.S. beer market volumes last year was a record, and noted that craft dollar share increased to 23.4 percent.

“Craft share is at an all-time high,” he said. “But at the same time, it’s more competitive than ever out there, in particularly with competition from the world’s largest brewers and not to mention wine and spirits.”

Craft’s share would be a lot higher if it were not for acquisitions made by big brewers such as Anheuser-Busch, MillerCoors and Constellation, which Watson said “have pulled a lot of volume out of the craft data set.”

In 2017, BA-defined craft grew volume by 5 percent. According to Watson, craft has settled into a “more realistic” longer-term growth pattern in the mid-single digits. He added that while the extra 1.2 million craft barrels produced in 2017 was “impressive,” compared to the past, “it’s certainly down.”

“I don’t think we’re ever going to see a year with three or three and a half million barrels added again,” he said.

As growth has slowed, that’s led to an increasing number of brewery closures. Last year, 165 breweries shuttered, the most in the modern craft era, Watson said.

“Those in the room should prepare themselves for closing numbers that are at this rate if not higher in the coming years,” he said.

Still, the number of new breweries getting into the space outpaced those that closed, as 997 beer companies opened in 2017. And more are on the way, Watson said. In the first quarter of 2018, the Alcohol Tax and Trade Bureau (TTB) counted 9,175 active brewer’s permits in the U.S.

Most of those companies are classified as “microbreweries,” meaning they produce fewer than 15,000 barrels annually, according to the BA. Watson, who said companies in that group grew 17 percent in 2017, to 5.7 million total barrels, referred to microbreweries the “growth engine of craft.”

“To give you an idea of what 5.7 million means, that’s the total beer demand in a state the size of Georgia or Michigan,” he said.

Watson and Gatza both touted the importance of brewery taprooms as sources of innovation and brand building for small brewers, and said direct-to-consumer sales last year totaled about 2.7 million barrels.

Watson added that the so-called upper tier beer segment — craft, imports, premium plus and domestic speciality brands — is “now driving the vast majority of the growth” and accounted for 40 percent of beer’s total market share in 2017.

“They’re now collectively bigger than the premium and premium light brands that have dominated the U.S. beer market for years,” he said.

However, Watson noted that craft’s share of growth in the upper tier has declined as large brewers have acquired craft brands and created confusion among consumers.

“It raises questions about how unified the craft brewing industry can be going forward,” he said.

For those breweries looking to sell to larger brewery groups or get rich quick, Gatza said those opportunities are harder to come by.

“If you’re looking for a quick buck, I think you have better chances if you go to Broadway and open up a honky tonk than you do in the craft brewing industry right now,” Gatza said. 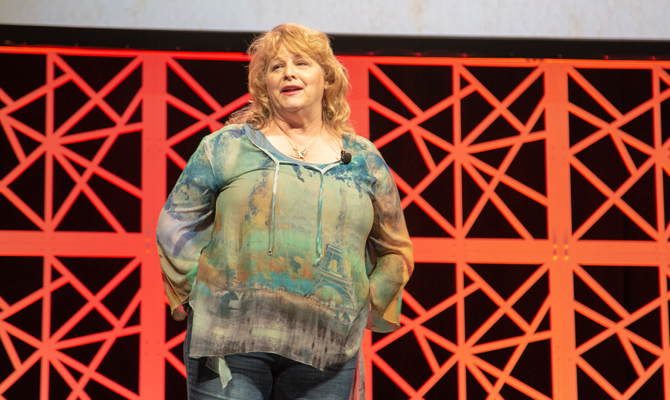 Following Watson and Gatza’s presentation, New Glarus co-founder Deb Carey took the stage to deliver the keynote address. Echoing Gatza, Carey said anyone looking to start a brewery to make a quick buck should instead hop on the next plane to Colorado and chase “the next gold rush.”

Carey, who with her husband, Dan, have grown New Glarus into a 230,000-barrel brewery that only sells its beer in its home state of Wisconsin, said she’s not motivated by money but by taking care of her employees and making quality beer. She said she is “ashamed” of breweries that lay off workers on a seasonal basis when sales decline.

Carey said craft brewers have an opportunity to succeed as the “big brewers are bleeding barrels” and using “nursery rhymes” to market their beer, referencing Anheuser-Busch’s “Dilly Dilly” Bud Light campaign. She said if any brewers in the room don’t feel like they can sell their beer against that campaign, “then please leave now.”

Carey added that if anyone doubts that there are loyal beer drinkers to be had, “I’m selling 230,000 barrels in a flyover state.”