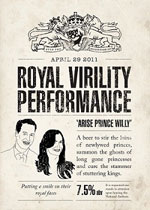 FRASERBURGH, SCT – The always experimental craft brewery from Scottland is up to it again, this time poking fun at the royal wedding.

“We put a bottle in a jiffy bag marked ‘Prince Willy, Buckingham Palace’. We sent it by Royal Mail as we presume they are most likely to know where he lives. As the bottle says, this is about consummation, not commemoration, so we hope he gets it.”

The beer will only be available for purchase on the BrewDog website and will be shipped on the 28th of April (the day before the wedding).

More details on the beer per the BrewDog website:

With this beer we want to take the wheels off the royal wedding bandwagon being jumped on by dozens of breweries; The Royal Virility Performance is the perfect antidote to all the hype. A beer should be brewed with a purpose, not just because some toffs are getting married, so we created something at our brewery that will undermine those special edition beers and other assorted seaside tat, whilst at the same time actually give the happy couple something extra on their big day.

For more information and to purchase the beer, visit the BrewDog website. A detailed look at ‘Arise Prince Willy’ can be seen on their blog.