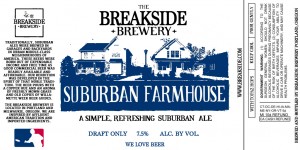 Portland, OR – Portland & Milwaukie, Oregon based Breakside Brewery is pleased to announce their latest draft only seasonal – Suburban Farmhouse Ale. Harkening back to the American brewing traditions of the 90’s and inspired by afternoons spent at barbecues in the immaculately manicured backyards of Suburban America. This fresh copper hued ale is a classic simple, refreshing example of suburban ale.
Label Text:
Traditionally, Suburban Ales were brewed in garages and backyards in urban middle-class neighborhoods of America. These beers were born out of expendable income and free time as good commercial beer was readily available and affordable. Our rendition was developed in the spirit of that noble tradition. The beer pours with a copper hue and an aroma of freshly mown grass and old copies of Willamette Week Beer Guides.

The Breakside Brewery is located in Portland and Milwaukie, Oregon. We are inspired by Affluent American tradition and imported ingredients.

Suburban-style saisons make a wonderful accompaniment to many foods, as they have a beautiful balance of dryness, natural acid, and gentle yeast
aromatics. Breakside recommends pairing this beer with a wide range of dishes, including takeout pizza or any dish from the neighborhood association’s annual potluck.
Availability

Suburban Farmhouse will be released to the Oregon and Washington beer markets beginning Feb 12 and will be available in 50L and 1/6 bbl formats. This is a limited-availability beer, as there is only enough being sent out into the trade to last until early March. It is available for purchase through Breakside’s distributors in these areas–Maletis Beverage, Bigfoot Beverage, and Click Wholesale Distributing. Look for this beer at specialty beer bars, growler fill stations, and bottle shops. The beer will also be available on draft at both Breakside’s Dekum and Milwaukie locations.

About Breakside Brewery
Breakside Brewery is a craft brewery producing exciting combinations of traditional and experimental beers, serving Oregon through wholesale accounts and their own brewpub in the Woodlawn Neighborhood of Portland, Ore. Sourcing locally and producing seasonally, Breakside owner Scott Lawrence is committed to supporting the community and expanding palates with a fresh approach to the industry, investing in the talent of a seasoned team. Brewmaster Ben Edmunds works with local chefs and fellow brewers to foster a culture of collaboration, while also setting the standard for innovation and creativity. Finding unique sources of inspiration, he incorporates uncommon brewing ingredients at the peak of their freshness and flavor in his own brews. The brewery is currently set to debut an expanded brew house in Milwaukie, Ore. late 2012 allowing creation of Breakside’s avant-garde beers at a higher volume. Breakside Brewery is located at 820 NE Dekum St.; Portland, Ore. and is open for lunch, dinner and happy hour. Find more information atwww.breaksidebrews.com or by calling 503-719-6475. Follow us on Facebook at Breakside Brewery or on Twitter @breaksidebrews.