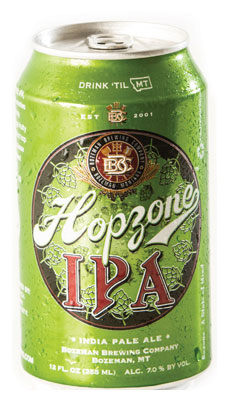 Bozeman, MT — Bozeman Brewing Company has expanded its canning operations to included Bozone Hefeweizen, Hopzone IPA and Bozone Plum St Porter in 12-ounce aluminum cans. These three favorites join the award-winning Bozone Select Amber Ale on store shelves across Southwest Montana. The six-packs are also available at the brewery and flow on tap alongside of other seasonal varieties at the local Tasting Room.

“These four beers are local favorites,” stated Todd Scott, the Brewery owner, “it’s been a long process but we think they’ll be a hit.” This summer the Brewery installed four new 40 bbl. fermenters to increase production and support canned beer demand. The installation, which took place via a crane and a hole through the building’s ceiling, will facilitate producing up to 10,000 barrels of beer a year.

The release is an important event as Montana gains momentum in the craft brewing industry. Nationally, Montana ranks second behind Vermont with the most breweries per capita. The state is home to 38 breweries, employing over 450 residents and generating $50 million in Montana-made products. Craft beer is harnessing national attention and Montana is doing its part. “Our beer reflects our unique community,” Scott described, “we are inspired by the people of Bozeman —they give our product the character it deserves.”

Todd Scott established Bozeman Brewing Company in 2001. In 2011, the brewery began canning their flagship Bozone Select Amber Ale, recently celebrated in Backcountry Magazine. Bozone brews have received awards across North America and the Sunday FUNDay events have been recognized, and frequently attended, in support of community nonprofits. To learn more about the brewery, visit the company website at www.bozemanbrewing.com and Facebook page at www.facebook.com/bozemanbrewing.