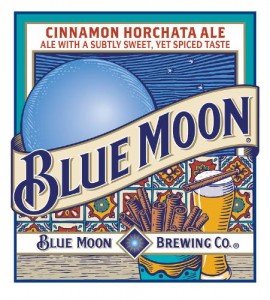 CHICAGO — This August, Blue Moon Brewing Company is introducing Blue Moon┬« Cinnamon Horchata Ale. Crafted with cinnamon, Belgian dark candy sugar and long-grain rice, the ale delivers a subtle sweetness and a smooth, creamy finish that is sure to delight Blue Moon drinkers over 21 years-of-age. The ale is inspired by the traditional and popular Latin American drink known as Horchata.

“Growing up in a Mexican family, I had Horchata all the time when I was young, but then I rediscovered it in recent trips to Latin America,” said Keith Villa. “I wanted to develop a brew for adults that combined the refreshing and creamy attributes of the traditional Horchata, so I’m beyond pleased that we finally made it a reality. It brings me great pride to introduce this brew into the market.”

Villa earned his Ph.D. in brewing from the University of Brussels in Belgium, an honor only a handful of brewers have achieved. Villa came back stateside and founded Blue Moon Brewing Company in 1995 to craft beers inspired by Belgian styles. His first interpretation turned out to be the brewer’s most popular beer, Blue Moon Belgian White, Belgian Style Wheat Ale. Since then, he has brewed several award-winning beers and continues to play an active role in creating new beers for the brewery. The new Blue Moon Cinnamon Horchata Ale is his latest creation and one inspired by his heritage.

At Blue Moon Brewing Company, everything we do flows from our artistic approach to brewing. We craft our broad array of beers with flavorful ingredients for an inviting taste, perfect for enjoying the moment with friends. It’s been that way since we added our first flavorful twist back in 1995 in Denver, and that’s why we say our beer and everything we do is artfully crafted. More information is available at www.BlueMoonBrewingCompany.com.