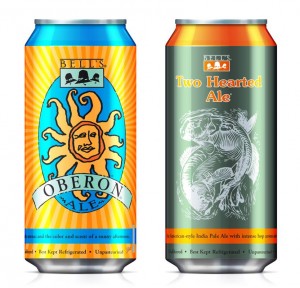 They will be available to purchase in 16-ounce four-packs in all markets the brewery currently distributes to.

Both designs will feature familiar images, but the Two Hearted can design will also bring back a local Kalamazoo artist’s illustration from a previously retired label first introduced in the late 1990s.

“This new option will allow our fans to take our beer to places where glass is not allowed. It opens up a lot of new opportunities to enjoy Bell’s beer and that’s a win for everyone,” said Laura Bell, Bell’s Vice President.

“We are all very excited about this,” she added.

The brewery’s new canning line is part of Bell’s most recent expansion which also includes the addition of twelve 800-barrel fermenters to its Comstock Brewery. The filler will have the capacity to fill 500 cans a minute and is from KHS USA Inc. located just outside of Milwaukee, Wisconsin.

The cans are produced by Denver-based Ball Corporation.

Bell’s Brewery, Inc. began in 1985 with a quest for better beer and a 15 gallon soup kettle. Since then, we’ve grown into a regional craft brewery that employs more than 200 people over a 19 state area, in addition to Puerto Rico and Washington DC. The dedication to brewing flavorful, unfiltered, quality craft beers that started in 1985 is still with us today. We currently brew over 20 beers for distribution as well as many other small batch beers that are served at our pub in Kalamazoo, the Eccentric Cafe. Our ongoing goal is to brew thoughtfully, creatively and artistically. We strive to bring an authentic and pleasant experience to all of our customers through our unique ales and beers. For more information, please visit bellsbeer.com.