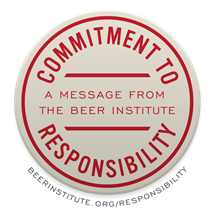 WASHINGTON — For the seventh consecutive year, the country’s major brewers and beer importers are promoting the Federal Trade Commission’s “We Don’t Serve Teens” program with messages on social media and in TV, radio, print, online and outdoor ads.


The “We Don’t Serve Teens” campaign carries a simple but powerful message: “The legal drinking age is 21. Thanks for not providing alcohol to teens.”

“The national program aims to limit access to alcohol by underage drinkers. And even as drinking among high school seniors has dropped substantially over the last two decades, too many teens still drink,” said Joe McClain, president of the Beer Institute.

A U.S. government survey shows that most teenagers who drink get alcohol from legal-age adults, such as parents or other family members, or they take it from their own or someone else’s home.

“Research shows us that parents are the biggest influence on whether or not teens make responsible decisions about alcohol. The people and the companies in our industry are honored to work with the Federal Trade Commission to tell teenagers, and their parents, that we don’t serve teens.”

Brewers and beer importers have also independently distributed millions of guidebooks, videos and other educational materials to help parents talk with their children about underage drinking, as well as tools and resources to help retailers check and verify IDs and prevent sales to minors. Brewers, importers and distributors have spent hundreds of millions of dollars over the last 30 years to support public safety, education and prevention campaigns, including the Federal Trade Commission’s “We Don’t Serve Teens” program.

Research shows efforts such as the ‘We Don’t Serve Teens’ program and other initiatives supported by the beer industry are making a positive impact. According to the U.S. Department of Health and Human Services’ National Survey on Drug Use and Health of 12-17 year-olds, teen drinking has declined 24 percent since 2002, to a record-low level. The Beer Institute and its members will continue to work to reduce teen drinking to zero.