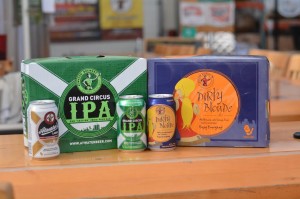 Detroit, MI. — There’s a retro-revolution brewing in the brewing industry and Detroit’s biggest brewer, Atwater Brewery, is leading the charge.

For the first time since 1985, beer will be canned in Detroit. Not since February 8, 1985, when Stroh Brewery closed its 135-year-old brewery on Detroit’s east side, has a Detroit beer been canned in the city.

Why not? Cans are lighter weight, better for recycling, more portable, quicker chilling, air tight and oxygen-free to name just a few benefits. Plus cans block the sunlight, or any light, better than bottles, keeping the beer fresher longer and tasting the way the great beer’s supposed to taste.

Atwater’s most popular beers, including Dirty Blond Ale, Grand Circus Session IPA and Atwater Lager will be immediately available in 12 oz cans. Atwater will also be canning in 16 oz and 19 oz sizes in the future.

“We’ve said all along we want to bring the art of brewing back to the Motor City and help to revive Detroit’s role as a leading producer of great beers,” said Atwater Brewery owner Mark Rieth. “In the past few years, we’ve grown to be Detroit’s biggest brewer. Canning is an important next step in our mission to bring Detroit everywhere.”

Atwater brews ‘Distinctly Detroit’ styles of beer in the German tradition. According to Rieth, “It’s all about brewing clean, palatable beers with layers of flavors. We’re thrilled that our beers, led by our Vanilla Java Porter and Dirty Blonde, have met such an enthusiastic response from the market.”

Bolstered by recent production expansion, Atwater is on pace for its tenth consecutive record sales year.