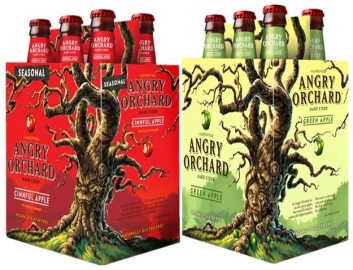 CINCINNATI — The cider makers at Angry Orchard, the number one selling hard cider brand in the US, are branching out and experimenting with American culinary apples, crafting two brand new hard ciders just in time for the fall season.

Angry Orchard Cinnful Apple, a sweet and slightly tart hard cider with a spicy kick of cinnamon, and Angry Orchard Green Apple, a hard cider with a tart and bright character like a fresh green apple, are the result of the cider makers’ first experiments with juice from American-grown apples. Cinnful Apple is a national seasonal release, while Green Apple is a year-round style currently in limited release with the national launch planned for early 2014.

“The cinnamon spice notes in Angry Orchard Cinnful Apple add hints of cocoa and a slight heat to the cider, which is balanced by a dry and warm finish. It is a perfect marriage of nostalgic flavors for the fall and winter seasons,” said Sipes. “Angry Orchard Green Apple showcases the recognizable tart, puckering flavor characteristic of green apples, meant to be enjoyed year-round, and unlike any other cider.”

Angry Orchard Cider Company launched three cider styles nationally in 2012, and has quickly become a favorite among hard cider drinkers for its high-quality ingredients and distinctly crisp and refreshing taste, making it the number one selling hard cider in the U.S. The cider makers at Angry Orchard have experimented for years with apple varieties from Europe, and have created high-quality hard ciders with apples from orchards in Italy and France.

Inspired by a sense of exploration among cider drinkers looking to experience new and exciting tastes, Angry Orchard is making its first foray into cider made with American culinary apples, with these two new cider styles. Certain regions within the United States, such as the Pacific Northwest and the Northeast, share characteristics — rich soil, ample sunshine and water — with the apple-growing regions of France and Italy that are known to produce juicy apples. The cider makers at Angry Orchard found that slightly less tannic juice from apples from Washington State complemented the ingredients in Cinnful Apple and Green Apple perfectly, creating a unique and balanced flavor profile for each cider.

Recently, hard cider has exploded in popularity in the U.S., with the latest IRI data showing the cider segment up 223% over the end of summer 2013, and GuestMetrics reporting that on-premise cider sales are up 70% versus last year.

Angry Orchard Cider Company’s cider makers have been experimenting with apple varieties and unique flavors to develop cider recipes for more than 15 years. Angry Orchard’s hard cider line-up — Crisp Apple, Apple Ginger, Traditional Dry, Elderflower, Iceman and Strawman — first experimented with a blend of Italian culinary apples from the Northern Alps and French bittersweet apples from Normandy. Angry Orchard’s newest styles, Cinnful Apple and Green Apple, are made with apples from the Pacific Northwest and the foothills of the Northeast. The juice goes through a lengthy fermentation process, with some ciders aged on oak for additional complexity and balance, before bottling. For more information, please visit www.AngryOrchard.com or like us atwww.Facebook.com/AngryOrchard.