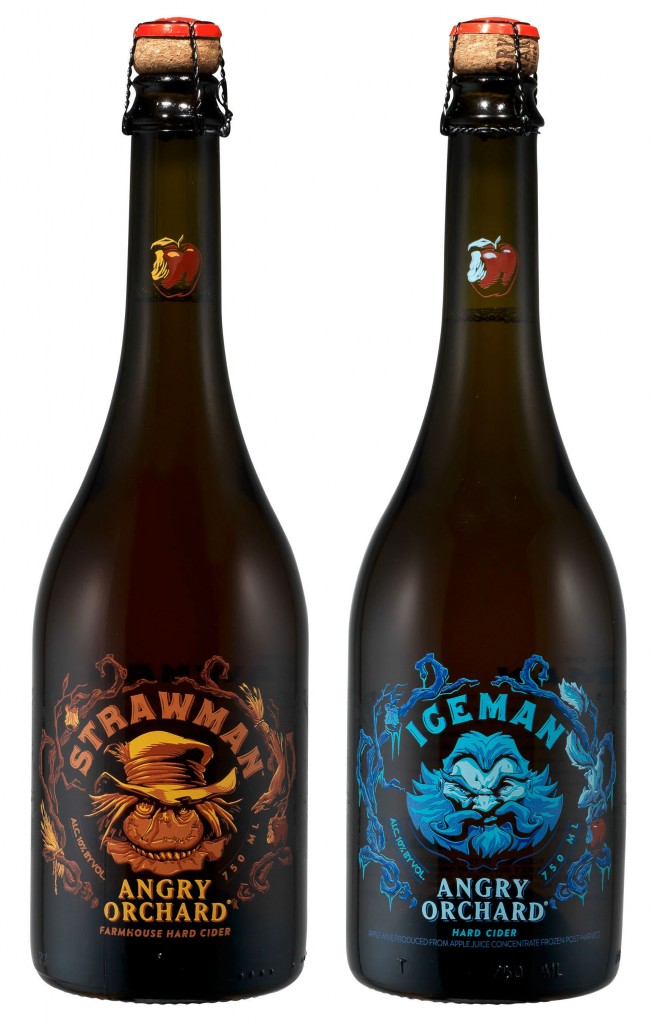 CINCINNATI, OH –– The cider makers at the Angry Orchard Cider Company have been hard at work on a new project — The Cider House Collection — and have just put the finishing touches on a new batch of specialty ciders that they’re releasing nationally this week. Angry Orchard Iceman,Ôäó inspired by traditional Quebec ice ciders, and Angry OrchardStrawman┬«, a farmhouse cider, are the result of experimentation with apple varieties, wood-aging techniques and fermentation methods. Both styles will be hitting shelves across the country this week.

“With Angry Orchard Iceman and Strawman, we put our own spin on ancient cider styles, using cider making techniques that we’ve developed over the past 15 years. To come up with these recipes, we’ve been tinkering with apple blends and fermentation methods,” said David Sipes , cider maker for Angry Orchard. “Over the past year, there’s been a renewed interest in hard cider in the U.S. and drinkers are exploring ciders like never before. With the Cider House Collection, our drinkers can experience our interpretation of these largely unknown cider styles.”

Both complex, wood-aged ciders, Strawman and Iceman, are made with heirloom apples from Italy, where the terroir significantly influences the flavor of apple varietals, and France, where apples unique to cider making have been cultivated for centuries. The ciders each have unique effervescent qualities and are served in individual, 750ml corked bottles. With higher alcohol content, warm flavors and more body, both ciders complement a variety of foods and are perfect for special drinking occasions or for sharing with a friend over dinner.

“Angry Orchard Strawman was influenced by centuries-old European farmhouse cider making techniques. Our team sought the perfect blend of apples and a unique fermentation and aging process to create our own version of a farmhouse cider with an earthy, yet subtly sweet flavor profile,” said Sipes. “For Angry Orchard Iceman, we took cues from the traditional ice ciders ofQuebec, creating a cider that is both delicate and sweet.”

“The Cider House Collection ciders showcase complex, wine-like flavors and can be enjoyed alone or with food,” Sipes explains. “These ciders have distinct aromas and flavors, so serving them in a glass shaped like a goblet or bowl, similar to wine, allows drinkers to have the full sensory experience. Similar to a white wine, these ciders should be served cool, but not cold, around a temperature range of 45-52 degrees F.”

Strawman and Iceman will be available nationwide for the first time, following a successful limited release in 2012 in parts of New England, California, Minnesota and Washington.

Angry Orchard Cider Company launched three cider styles nationally in 2012, and has quickly become a favorite among hard cider drinkers for its high-quality ingredients and distinctly crisp and refreshing taste.

After 15 years of searching for the right apples to harvest, the Angry Orchard cider makers found that the best apples for their ciders come from historic orchards in Italy and France. In Normandy and Bretagne, France, farmers have been growing bittersweet apple varieties unique to cider making for hundreds of years. Unlike ordinary apples, these bittersweet apples impart tart and tannic characteristics and tend to look gnarly and unattractive — serving as inspiration for the Angry Orchardname. In the southern foothills of the Alps in Northern Italy, they found culinary apples that, much like grapes, have a taste that is unique to the terroir of the region. Blending the French bittersweet apples with the Italian culinary apples creates the balance of tannin, acidity and sugar unique to our Angry Orchard hard ciders.

In a short period of time, Angry Orchard┬« became the number one selling hard cider brand family in the U.S.* Hard cider has exploded in popularity recently, growing 64 percent in 2012 vs. 2011**, especially remarkable when compared to the growth of beverages like wine and craft beer, which grew 5.6% and 13% respectively.***

The Angry Orchard Cider House Collection is now available nationwide*** for a suggested retail price of $14.99 per bottle (price varies by market). To find where Angry Orchard hard cider is served near you, visit our “cider finder” at www.angryorchard.com/find-angry-orchard/.

Angry Orchard Cider Company’s cider makers have been experimenting with apple varieties and unique flavors to develop cider recipes for more than 15 years. Angry Orchard’s hard cider line-up — Crisp Apple, Apple Ginger, Traditional Dry, and most recently, Elderflower — picked European apples that are a blend of Italian culinary apples from the Northern Alps and French bittersweet apples from Normandy. The juice goes through a lengthy fermentation process, including oak-aging for optimal complexity and balance, before it is bottled. For more information, please visit www.AngryOrchard.com or like us atwww.Facebook.com/AngryOrchard.

****The Cider House Collection will not be available in New Hampshire, Pennsylvania and Virginia.