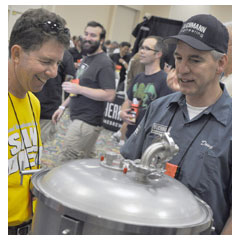 BOULDER, CO – For the second consecutive year, the American Homebrewers Association (AHA) conducted a survey of homebrew supply shops. The 2011 survey, conducted in the spring, saw a dramatic increase in respondents—67 percent increase over 2010’s survey. Across the board, the results indicate that homebrewing is growing consistently, leading to a more diverse demographic of homebrewers and new shops catering to local enthusiasts.

Overall, homebrew supply shops grew 16 percent in gross revenue in 2010, which matches the previous year’s growth rate and reflects a steadily increasing demand for the ingredients and equipment needed to brew at home. Additionally, 82 percent of shops saw an increase in sales of beginner kits in 2010, another strong indicator of the growing interest in the hobby.

Also of note, 43 percent of retailers indicate that the most common age group for beginner equipment purchasers is those under 30., which points to homebrewing’s widening demographic. AHA Director Gary Glass explains: “Traditionally a hobby dominated by middle-aged males, the influx of younger homebrewers bodes well for the future of the pastime.” In that same vein, on an anecdotal basis, shops surveyed indicated that they saw the numbers of female homebrewers gradually ticking upwards.

With growing demand for homebrew supplies and equipment, homebrew shops are responding to the trend and benefiting from the growth. In 2010, 25 percent of shops indicated they’d been open for three years or less, showing that many new shops are springing up to meet the needs of homebrewers in underserved regions and towns.

The AHA will continue to conduct this survey annually to track industry trends and to supply retailers with data relevant to their businesses. Future surveys will incorporate suggestions from retailers on additional data they would find useful.