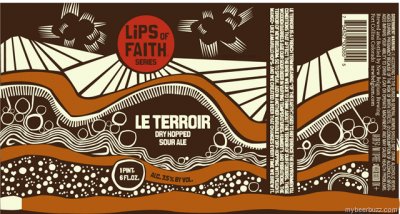 Dunkelweiss is a deep amber brown with a dense off-white head, offering a rediscovery of hefeweissbiers through a Belgian brewer's lens.  Envisioned by Matty "Smooth" Gilliland, this beer opens with sweet clove, chocolate and banana notes that give way to a warm finish with a peppery tingle across the palate.

"I thought it would be fun to make a German wheat beer; we've explored the Belgian wheats pretty thoroughly,” said Gilliland.  "Since this is Lips of Faith, making a big, strong, dark Weiss beer sounded pretty folly-licious."

"Think of it as a Gran Cru dunkelweiss,” he added.

Le Terroir Dry Hopped Sour Ale is the second Lips of Faith beer now available in limited markets.  Le Terroir is a French term meaning "of the earth."  Used to reference the environmental conditions that affect the brew, New Belgium prefers to think about the terroir of our foeders, the wooden barrels that age sour beers in varying temperatures, humidity and vibrations.  Add in another variable by dry-hopping with peachy, mango-like amarillo hops, and Le Terroir changes every time it is brewed.

Dunkelweiss and Le Terroir are sold in 22-ounce bombers and are available in select markets.  The beers are also on tap at the New Belgium Liquid Center in Fort Collins, Colorado.

You can read a nice blog entry from New Belgium about the Dunkelweiss here.