Empire Brewing Co is coming to Bangkok for a very special Tap Takeover in Thailand’s capital.

Empire Brewing Co is coming to Bangkok for a very special Tap Takeover in Thailand’s capital. Mikkeller will be showcasing a huge selection of New York State brewed craft beers!

Mikkeller came up with the idea of showcasing a bunch of small independent craft breweries from New York State, to all you beer lovers in Bangkok. They will be flying all the kegs in, to ensure they are super fresh! Apart from a lot of awesome beers, they will also have several of the brewers in town, for this one-off event. We packaged up some of our favorites including Deep Purple, White Aphro and Skinny Atlas Light. 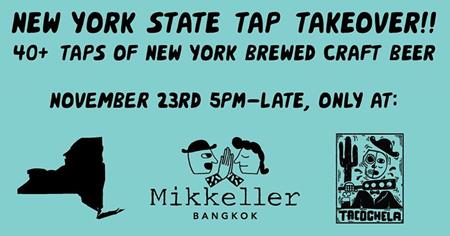