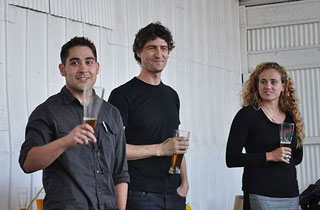 And while craft beer shares very little (if any) similarities with the NBA, one thing is certain; it’s the youth that are the future of both the NBA and craft beer businesses.

So while Meg Gill and Jon Carpenter aren’t exactly household names, they are the ‘rising stars’ of a growing craft beer industry that in 2010 saw retail dollars increase 12 percent.

But it’s Gill, who at the age of 26 is finally able to embrace her youth.

“I used to lie about it when I would go into an AB distributor’s office,” she said. “I had it down. I would tell them I graduated in 2003, which was my High School graduation.”

Gill, who graduated from Yale in 2007 found her way into craft beer by way of the triathlon world. As a competitive swimmer and team captain at Yale, Gill became close with Nicole Deboom who graduated 13 years earlier. Deboom, a successful triathlete had recently launched an apparel line, Skirt Sports, and hired Gill to do sales and marketing.

At Skirt Sports, Gill was approached by Oskar Blues Founder, Dale Katechis, to help reach new markets through their start up event planning company. Katechis then offered Gill a job managing their west coast sales operations, which she accepted.

Gill packed her bags and headed to San Francisco. Before long, she was offered the National Sales Manager position with Speakeasy, a job she couldn’t refuse. With Speakeasy, Gill was able to master the distribution network, a skill that Golden Road Co-Founder Tony Yanow is hoping to tap into.

Of course without beer, there is nothing to distribute.

Enter Jon Carpenter, the 29 year old Assistant Brewmaster who for the past year and a half has been brewing “off-centered ales for off centered people.”

Carpenter’s last official day with Dogfish Head is today. Next week, he will move 3,000 miles across the country, back to the state where he first learned how to brew.

“I am looking forward most to the opportunity to do something new and to work with some more great people,” he said. “I can’t say enough about working at Dogfish and working with a guy like Sam, but I have two equally as inspiring, animated and exciting people in Meg and Tony to work with out there. It’s fun for the three of us build our dream together.”

The dream, a 42,000 square foot brewery in the heart of Los Angeles, will soon become reality — with a scheduled opening for October of this year.

And while Golden Road already occupies the space, it’s the installation of equipment and brewery planning where Carpenter’s experience at Dogfish will be critical

“The last year here at Dogfish has been all about rebuilding and growth,” said Carpenter. “Essentially what Floris and I have spent most of our time doing here is restructuring the way that we run the brewery – also planning and trying to rebuild and grow the brewery in the right way.”

As for the “Brewmaster” title, Carpenter said he is ready for the challenge.

“The Brewmaster role is more or less the same responsibilities I was tasked with at Dogfish,” said Carpenter. “The day to day management of all the personnel, recipes and brewing production is something I have pretty much been doing for the past year.”

And if Gill and Carpenter are the draft picks, it’s Yanow who is the GM.

Yanow, the proprietor of Tony’s Darts Away and Mohawk Bend, promised his wife he wouldn’t start another business venture.

“After talking with Meg, the opportunity to work with her was too tantalizing to pass up,” said Yanow. “The truth is, Meg is the muscle here, and she is doing most of the work. I have a lot of plate spinning and this business would not be here if it wasn’t for her.”

And Yanow’s praise didn’t stop there. He believes Carpenter is going to be a perfect fit for Golden Road.

As for their beer offerings, Golden Road isn’t showing their hand quite yet but according to Yanow, a lower-alcohol offering is in the works.

“We are going to concentrate on beers that you can have a few of,” he said.

And so the journey down the ‘Golden Road’ begins. The brewery, which plans to initially offer their suds in 16oz cans and on draught, is committed to a goal of maximizing their current space.