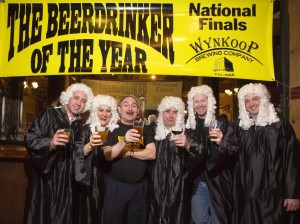 Monteiro’s in-depth beer expertise, extensive travels in pursuit of beer, and his efforts to promote great beer to others helped him win the 2013 title.

“This year was very difficult to judge,” said Cody Christman, the 2009 Beerdrinker of the Year and a judge at Saturday’s finals. “All three finalists were superb and deserved to be on the national beer stage. ButWarren won the competition with his blend of wit, knowledge, and a deep passion for all things related to beer.”

Monteiro has sampled beers throughout theUnited States,Europe,Central American,India,Sri Lankaand other nations. In 2012 he visited breweries and beer festivals inEngland,Belgium, theNetherlandsand theUS. He samples an average of 350 beers each year.

For seven years, Monteiro has written his “Beer Sensei” column for the popular Ale Street News. His home beer bar is the Blind Tiger Ale House in New York City.

In his 2013 Beerdrinker of the Year resume, he detailed his philosophy of beer drinking: “It’s not a habit, it’s a lifestyle. This is why I constantly travel — to get a taste of a new brew or one I’ve been missing, and to find a way to share it whenever possible. I consider creative beer drinking to be an essential part of the tapestry of art and fellowship contributing to a full life.”

In his opening statement Saturday, Monteiro, a three-time finalist for the title, recounted how a friend had described him as “the Susan Lucci of beer” for his ability to make the Beerdrinker of the Year finals but not win the coveted title.

In his “beer whispering” segment of the finals, Monteiro carried out a steamy discussion with a bottle of Cantillon lambic beer. His comments (“I intend to have my way with youÔÇª”) drew great laughs from judges and the audience.

Monteiro also delivered keen assessments of the beers the finalists judged in blind fashion, and he offered solid answers to the judges’ questions.

For his “bribing of the judges” segment, Monteiro tapped and served a firkin of a special homebrew he made based on Russian River Brewing’s popular Pliny the Elder.

For winning the 2013 title, Monteiro wins free beer for life at the Wynkoop Brewing Company, a $250 bar tab at the Blind Tiger, and clothing proclaiming him the 2013 Beerdrinker of the Year.

For more details on the Beerdrinker of the Year search and Wynkoop Brewing Company visit www.wynkoop.com.