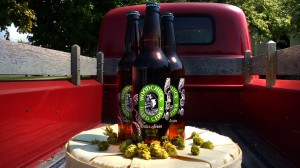 MIDDLEBURY, Vt. — Woodchuck Hard Cider is launching a new line of ciders crafted from the many cider recipes and test batches tucked away in the back of the cidery cellar.

The Woodchuck Cellar Series will be released across the country, and feature a rotating selection of innovative cider styles every few months.

The first such cider is Woodchuck Cellar Series Dry Hop. The dry hop technique, by which the fermented cider is strained through a tank of fresh whole cone Cascade hops, infuses the cider with crisp citrus and pine notes. The smooth apple character of Woodchuck’s signature hard cider balances perfectly against the bitterness of the hops. It’s another category bending cider from Woodchuck.

“The cellar series is a really exciting project for us,” said Cider Maker John Matson. “It gives us the opportunity to take some of our most experimental, previously unreleased ciders, and put them in the hands of our fans. Dry Hop is a great balanced cider and it represents just the tip of the iceberg for the Cellar Series.”

Each cider starts as a blank canvas upon which unique ingredients, yeast strains, and fermentation techniques will serve as the brushstrokes. Each batch will be produced in extremely limited quantities to allow quick turn over between styles.

The Cellar Series will be pasteurized and featured in a 22oz bottle. Alcohol by volume (ABV) will vary between 5.5% and 6.9%. The styles will rotate every few months. Dry Hop, (6.9% ABV), is on store shelves now thru the end of October. Suggested retail for a 22oz bottle is $4.99.

Woodchuck Hard Cider is a hard cider handcrafted with apples. Woodchuck Amber was developed in a Proctorsville, Vermont garage in 1991. Its recipe and creator, Greg Failing, remain at the core of the product. Woodchuck Hard Cider now operates in a state-of-the-art cidery in Middlebury, Vermont, and its lineup of styles has grown to include a variety of limited and private reserve releases. Distribution, which started in a single Vermont country store, now stretches across all 50 states. The Woodchuck family is dedicated to providing exceptional quality and premium taste in every bottle. A naturally gluten-free beverage, Woodchuck Hard Cider lends itself well to food pairings and recipes.