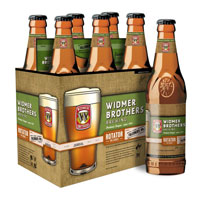 PORTLAND, OR. — For the next installment in its Rotator IPA series, Widmer Brothers Brewing is bringing back one of its most popular limited edition ales: Falconer’s India Pale Ale. Brewed and introduced for the first time a year ago, Falconer’s IPA is the only Rotator IPA series beer to make a comeback thus far and is the sixth release to date. Crafted with a proprietary Falconer’s FlightÔäó hop blend that honors the late Glen Hay Falconer, Falconer’s IPA is a testament to the brewer’s legacy and dedication to supporting aspiring brewers.

“Glen Hay Falconer was an incredible individual who inspired brewers—from the novice to the pro—in all corners of the country, not just the Northwest,” recalled Kurt Widmer, co-founder of Widmer Brothers Brewing. “His contributions will never be forgotten, and we’re proud to be part of continuing his legacy.”

In addition to brewing the commemoratory beer, Widmer Brothers will donate $5,000 with the release of Falconer’s IPA to the Glen Hay Falconer Foundation, a nonprofit organization created to commemorate and celebrate the life, interests and good works of Glen Hay Falconer. Contributions will help fund brewing scholarships for current or aspiring brewers, providing the education and foundation for success. In addition, a portion of the proceeds from sales of Falconer’s Flight Hops will be donated to the foundation.

“The Rotator IPA series is all about experimenting within a specific beer style and sharing new and unique interpretations with beer lovers,” said Ben Dobler, Widmer Brothers brewer. “While we didn’t plan on repeating beers in the Rotator IPA Series, every once in a while we come across a recipe that is too good to brew only once. We think Glen would agree, and it’s fitting that Falconer’s IPA is the beer to buck tradition.”

The Rotator IPA series features an ever-changing offering of IPAs handcrafted by the Widmer Brothers brewing team. This year, Falconer’s IPA follows on the heels of Shaddock IPA, released in May, and Spiced IPA, released in January. The series launched in 2011 with X-114 IPA, followed by Falconer’s IPA and O’Ryely IPA. Each new release is brewed in limited quantities, and until this release, once it’s gone, it’s gone for good. This second release of Falconer’s IPA offers beer drinkers another chance to enjoy the legacy of a brewing legend.

Falconer’s IPA is a bright, moderately bitter IPA with stone fruit aromas and a strong malt backbone. The IPA is brewed with Falconer’s FlightÔäó hop created by Hopunion, LLC, a Pacific Northwest-based company with hop growers in Oregon and Washington. Falconer’s FlightÔäó hop includes a blend of many of the Northwest’s most unique hop varieties. Each hop was hand selected for its superior aromatic qualities, imparting distinct tropical, citrus, floral, lemon and grapefruit tones.

Falconer’s IPA is available in limited quantities on draught, in six-packs, 12-packs, and in 22-ounce bottles at select retailers nationwide. Falconer’s IPA has a suggested retail price of $8.99 for six-packs and $15.99 for 12-packs.

About the Rotator IPA Series:

Widmer Brothers brewers’ recipe book is full of IPA recipes. Rather than just pick one, the brewers wanted to share as many of these unique brews as they could with beer lovers everywhere. As a result, Widmer Brothers created the Rotator IPA Series, an ever-changing offering of different IPAs. The series was created to showcase the brewers’ penchant for experimentation and exhibit their freedom for innovation within the broad IPA style. The return of Falconer’s IPA is the sixth beer in the brewery’s Rotator IPA Series, and was preceded by X-114 IPA, the first release of Falconer’s IPA, O’Ryely IPA, Spiced IPA and most recently Shaddock IPA. The Rotator IPA Series beers are only available while supplies last.

About the Glen Hay Falconer Foundation:

The Glen Hay Falconer Foundation is a nonprofit organization created to commemorate and celebrate the life, interests and good works of a well-loved and leading Northwest brewer. The mission of the foundation is to contribute to the Northwest craft brewing community by providing opportunities for professional and aspiring brewers to further their knowledge and expertise.

What started as a dream for two ordinary brothers who just loved beer has now become a reality for two ordinary brothers who still just love beer. Kurt and Rob Widmer helped lead the Pacific Northwest craft beer movement in 1984 when, in their twenties, they dreamed of brewing American interpretations of authentic European-style beers. In 1986, Widmer Brothers Brewing introduced the first American-style Hefeweizen; today, the unfiltered cloudy beer is the company’s signature brew and one of the best selling wheat beers in the country. Based in Portland, Ore., the brewery currently brews a variety of beers including Drifter Pale Ale, Nelson Imperial IPA, Rotator IPA Series, Drop Top Amber Ale and Pitch Black IPA. For more information about Widmer Brothers Brewing, visit www.widmerbrothers.com.