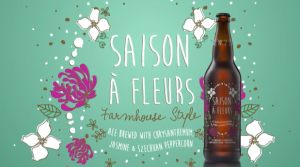 Saison ├Ç Fleurs is the second of six Widmer Brothers limited release collaboration beers with Oregon breweries to be released this year as part of a series that commemorates Widmer Brothers’ 30 year history. The collaboration series is a celebration of the brewery’s 30th anniversary, the Oregon brewing community, and the unique camaraderie between craft brewers.

“We just celebrated our fourth anniversary this year and Widmer Brothers is celebrating their 30th,” said Ben Edmunds, brewmaster at Breakside Brewery. “It was a lot of fun to come together and use our combined knowledge and different brewing approaches to create Saison ├Ç Fleurs. The beer is infused with each brewery’s personality and style, and is a great beer to drink while celebrating the 30th anniversary.”

“We’ve wanted to brew a beer with the Breakside team for a while now, and the 30th anniversary was the perfect opportunity,” said Ben Dobler, innovation brewer at Widmer Brothers Brewing. “It’s always fun to work with good friends, especially when we’re talking about the creative brewing minds at Breakside, Ben Edmunds and Jacob Leonard. We’re really happy with Saison ├Ç Fleurs and are looking forward to sharing it this summer.”

Saison ├Ç Fleurs will be available in the coming weeks in 22-ounce bottles and on draught, with limited distribution in select markets, including Portland, Seattle, San Francisco, San Diego, Minneapolis, New York City, Boston, and Philadelphia.

There will be release parties for Saison ├Ç Fleurs in Tacoma, Wash., at The Red Hot on June 4 at 5:00 p.m., and in Portland at Saraveza on June 13 at 6:00 p.m. Patrons will have the opportunity to meet brewers from both breweries and sample the unique beer alongside a special, extremely limited gin barrel aged version of the beer.

The next beer in the 30th Anniversary Collaboration Series will be brewed with Bend, Ore.’s 10 Barrel Brewing and will be available in mid-July.