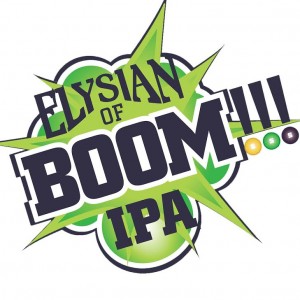 This new beer was brewed on our system by Elysian brewer Kevin Watson.

Kevin describes the beer as “a full-on blitz of hop aromas.” The beer was made with four kinds of hops from Washington and weighs in around 7% ABV, with about 45 IBUs.

“It’s got a massive hop bouquet,” says WFB head brewer and co-founder Brian Lutz. “Kevin brought out a ton of Chinook, Citra, Mosaic and experimental hops and most of them went into the beer late in the brewing process. For an emphasis on aroma instead of bitterness.”

Our pal and Elysian co-founder David Buhler says the beer is a “super hoppy but super-quaffable northwest IPA that will go ‘boom!’ on your palate.”

At the same time that Boom! goes on tap at West Flanders, Elysian will tap a version of the same beer at its three brewpub locations in Seattle.

The Seahawks flag flies at WFB for two weeks or until Boom! is gone, whichever comes first.

Seahawks and Broncos fans are invited to attend in their best team gear and Super Bowl Champion and AFC Champion gear.

I’m attaching a Boom! IPA logo and a brewing-day shot of Watson with Brian Lutz.

If you’re in the area, stop in for the tapping of the beer or a glass of Boom! over the next couple weeks.

To add extra excitement to the tapping party, we’ve invited outspoken Seahawks cornerback Richard Sherman to work the West Flanders Brewing host stand for the tapping party. (Would I kid you?)