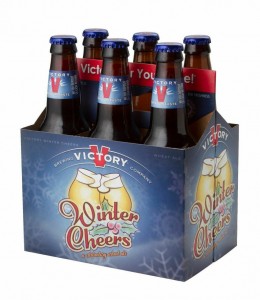 DOWNINGTOWN, PA — Victory┬« Brewing Company (Victory) is pleased to announce the return of its holiday seasonal, Winter Cheers. Welcoming and warming, Winter Cheers is a delicious refreshing wheat ale that is light in body and soothing in texture. Combining German wheat and barley malts, oats, torrified wheat and whole flower Tettnang and Citra hops, the fruity and spicy holiday brew delivers a crisp finish, with hints of banana, clove and citrus.

At 6.7% ABV, Winter Cheers lives up to its name, fueling festive times and chasing winter’s chill. Due to its charming flavor profile and broad appeal, it is the perfect accompaniment to a variety of dishes ideal for any holiday gathering. Instead of the obligatory bottle of wine, a six-pack of this special seasonal paired with a homemade treat makes for a unique and memorable hostess gift.

Available now until mid-January at craft beer bars, bottle shops, beer distributors and major gourmet grocery stores including Whole Foods and Wegmans, throughout Victory’s 35 state distribution footprint. Winter Cheers is offered on draft and in 12 oz. bottles (six packs) for approximately $9.99, but varies upon location. Use Victory’s Beerfinder to discover a nearby location, or download the free Victory Mobile app for Android or iPhone.

“With Winter Cheers wheat ale, we approached the spiciness one would expect in a holiday beer but in a much more refreshing, unique, and flavorful manner. It is meant to be enjoyed and shared among friends or family and Victory fans really took that to heart last year, so it’s no surprise it’s back for a second year, ” said President and Brewmaster, Bill Covaleski.

Victory Brewing Company is a craft brewery headquartered in Downingtown, Pennsylvania. Founded by childhood friends, Bill Covaleski and Ron Barchet, who met on a school bus in 1973, Victory officially opened its doors in February of 1996. In addition to the original Downingtown brewery and brewpub, Victory recently opened a second state-of-the-art brewery in Parkesburg, PA to expand production capabilities and serve fans of fully flavored beers in 35 states with innovative beers melding European ingredients and technology with American creativity. To learn more about Victory Brewing Company visit us on the web at www.victorybeer.com.