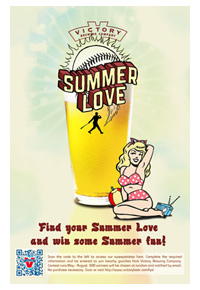 DOWNINGTOWN, PA — In early May, Victory’s Summer Love Ale will hit shelves across the country. At the same time, consumers will begin to see signage that reads, “Find Your Summer Love.” By simply scanning a QR code found on various posters, coasters and across the web, Victory drinkers and the general public will be entered to win summery items from Victory Brewing Company.

Why is Victory doing this?

Victory Brewing Company has always looked for ways to give back to beer enthusiasts. Through this contest, Victory can do just that, while simultaneously advertising Summer Love Ale.

What do consumers win?

More than 500 winners will be randomly selected over the course of the summer. Prizes will include summer-themed gear like Frisbees, lip balm, beach balls and more.

When do they win?

Victory will be selecting multiple winners every month from May through August and notifying them via email, phone or USPS. All winners will be notified no later than September 14, 2012.

In order to comply with various state regulations, this contest will be voided where prohibited. Anyone may scan the code and complete the information required to enter. No purchase necessary. Alternative methods for entering include, visiting www.victorybeer.com/fysl or sending a note card with name, birthday and mailing address to Victory Brewing Company, ATTN: Find Your Summer Love, 420 Acorn Lane, Downingtown, PA 19335.