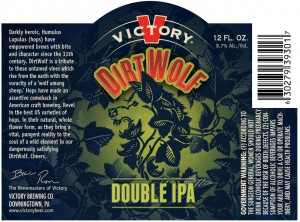 DOWNINGTOWN, PA — Victory┬« Brewing Company (Victory) is pleased to announce several additions to its lineup of packaged beers hitting the market this fall, including a new year-round offering, DirtWolfTM Double IPA, and holiday seasonal ale, Winter CheersTM. The brewery also will return an old fan favorite to the market, Old Horizontal┬«, after a hiatus in 2012 and 2011.

Wildly assertive, intentionally untamed and dangerously satisfying, DirtWolf Double IPA is the culmination of Victory’s double IPA series experiment with whole flower American-grown hops. With two-row German malts and a well-balanced combination of whole flower Citra, Chinook, Simcoe, and Mosaic hops, this 8.7% ABV brew blends the powerful citrus aroma and fruity flavors, with the piney, earthy and mildly floral characteristics found in these intriguing hop varieties. Replacing Victory’s Hop Wallop┬« Ale, which will take a hiatus from the market for the time being, DirtWolf Double IPA will launch the brewery’s entry into four-packs when it begins to hit markets in October.

“So a wolf and a prospector walked into a bar…,” joked President and Brewmaster, Bill Covaleski. “No, in all seriousness, Hop Wallop will be missed, but isn’t necessarily gone forever. We developed that brand 10 years ago as our flavorful response to the hop-bomb vogue of the time. But as brewers who enjoy experimenting with beer styles and ingredient varieties, we looked for the opportunity to do other interesting recipes as time passed. Making the decision to put Hop Wallop aside for a few years allows us to bring this delicious new double IPA, DirtWolf, to the market in bottles.” 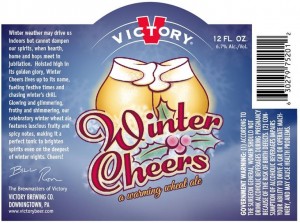 Light in body with a soothing texture, Winter Cheers is a stark contrast from the pungent punch of DirtWolf. A wheat ale, combining German wheat and barley malts, oats, torrified wheat and whole flower Tettnang and Citra hops, this fruity and warming holiday brew delivers a refreshing finish, with spicy hints of banana, clove and citrus. At 6.7% ABV, this beer will fuel “festive times and chase winter’s chill,” and will be available in 12 oz. bottles (six-packs) and on draft, beginning distribution in October as well.

Barleywine fans also will enjoy the return of Victory’s Old Horizontal, hitting shelves again in November of this year, this time in 22 oz. bottles. With floral, fruity aromas and lingering sensations of candied and citrus fruit, the late warming effect of this 11% ABV brew delivers a harmonious finish.

“Our fans have spoken, and we were listening,” Covaleski continued, addressing demand for the return of Old Horizontal by many Victory-faithful. “As we look toward the completion of our second brewery in Parkesburg, fans can expect several of our vacationing brands to make a return, along with many new and exciting recipes and styles.”

Other notable fall releases from Victory include:

Victory Brewing Company is a privately held craft brewery headquartered in Downingtown, Pennsylvania. Begun by Bill Covaleski and Ron Barchet, childhood friends who met on a school bus in 1973, the brewery formally began operations in February of 1996. Victory, Pennsylvania’s widely acclaimed brewery and restaurant, now serves fans of fully flavored beers in 30 states with innovative beers melding European ingredients and technology with American creativity. To learn more about Victory Brewing Company visit us on the web at www.victorybeer.com.