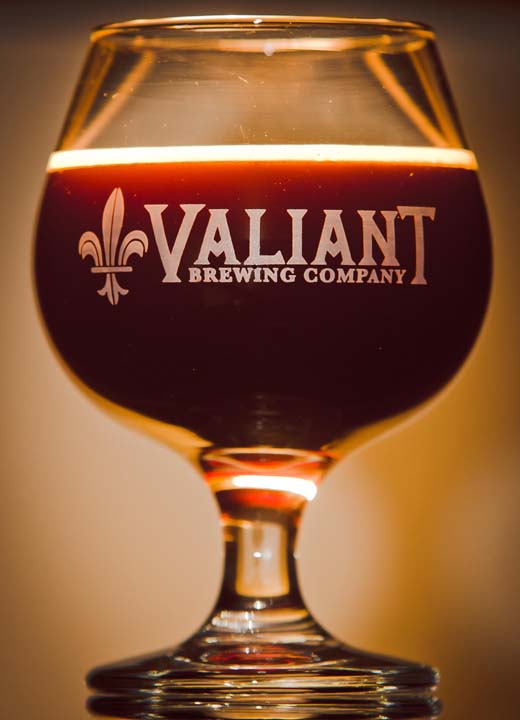 Hot on the heels of its six-month anniversary, Orange’s newest microbrewery has released Stentorian, a 13.3% ABV barrel-aged English barleywine.

“We’ve been waiting a long time for this,” says brewmaster Brian Schroepfer, who owns and operates Valiant Brewing Company with his wife Kelly. Schroepfer developed the recipe for Stentorian years ago, and brewed this batch several months ago before aging it in bourbon barrels.

Barleywine fans flocked to the brewery Aug. 31 for the release party. Deep copper and bronze, Stentorian has an aroma of dried fruit, like plum, date, and rich raisin. The overtone of caramel sweetness combines with a deep malty aroma, while a slight presence of oak helps balance out the complex floral notes from the late-addition Goldings hops.

The first taste yields intense caramel and toffee flavors that result from the multi-layered complexity of Schroepfer’s selection of malts (and long kettle caramelizing).

Valiant has a lineup of 15 craft beers in its tasting room, including some unique styles: an Imperial black espresso Saison (Mounds of Grounds), a Belgian IPA (Tilt Shift), an Imperial chocolate porter (Pathos), and a Double Red Wheat (Stonewall Jackson 5). The brewery recently signed with a Southern California distributor and is talks with a Washington state distributor, and its Fields Ablaze Saison—an easy-drinking 7.2% ABV beer infused with lemongrass-seckel pear tea—won Silver in the 2013 Los Angeles Commercial Beer Competition.

“We’re focused on making great beer—and on moving in exciting new directions,” says Schroepfer. “Seeing our tasting room filled with craft beer lovers excited to taste our barleywine—that’s a real affirmation of everything we strive to do.”

Valiant Brewing Company, located at 2294 N. Batavia, Unit C, in Orange, is currently open Thu-Fri 5-9 p.m. and Saturdays noon-9 p.m. You can learn more about the brewery at www.valiantbrewing.com or by following Valiant Brewing on Facebook or Twitter.