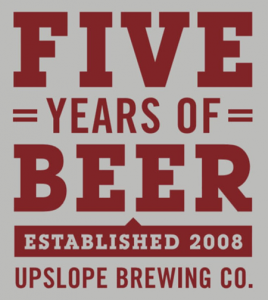 BOULDER, Colo. (October 28, 2013) — Upslope Brewing Company is celebrating five years of brewing beers this weekend on Nov. 1 and 2. To mark this momentous anniversary, they are hosting back to back parties at both of their breweries in Boulder.

“We can’t believe it’s been five years! A second location and countless pints later, we’re thrilled to be where we are,” said Upslope Founder, Matt Cutter. “It hasn’t been an easy road, but it’s been a fun one thanks to the support of our fans and the incredible Colorado craft beer culture. Let’s cheers to five years of doing what we love and many more to come!”

To celebrate their roots, Upslope will kick off the weekend on Friday, Nov. 1 with a party at their original North Boulder brewery on Lee Hill Road from 2-8 p.m. To thank their loyal fans who have supported them since the beginning there will be special tappings of limited release Upslope brews, live music from The Prairie Scholars starting at 5 p.m. and food from the Bumper Crop food truck.

On Saturday, Nov. 2 the celebration moves to Upslope’s main production brewery at Flatiron Park for their ‘Five Years of Beers Bash’ from 2-8 p.m. In addition to their tap room, Upslope is making room for party goers by opening up their brewery and back parking lot for a throw down that is sure to be one for the books.

Highlights for Saturday’s event will include the tapping of a number of limited edition brews, including their Fifth Anniversary Ale, food provided by Chef Hosea Roseberg of Blackbelly Catering as well as out of this world burgers by Burger Radio. Live bluegrass music by Jeff Brinkman Band, a former contestant on the Fox reality show “The X Factor”, will crank up the party in the back lot.

For the latest information on the party weekend as well as other Upslope happenings visit them on Facebook and Twitter.

Boulder-based Upslope Brewing Company is the creator of premium, filtered ales and lagers that are artfully crafted using natural ingredients. Packaged in aluminum cans for exceptional portability, and because it’s best for the environment, Upslope complements the outdoor lifestyle and caters to the on the-go beer enthusiast. The five flagship beers include: Pale Ale, India Pale Ale, Brown Ale, Craft Lager, and Imperial India Pale Ale. Additional installments are offered in a Limited Release Series. In an ongoing effort to protect Colorado watershed, and the key ingredient in Upslope ales and lagers, one percent of Upslope Craft Lager’s revenue benefits Colorado Trout Unlimited. Learn more about Upslope at www.upslopebrewing.com.