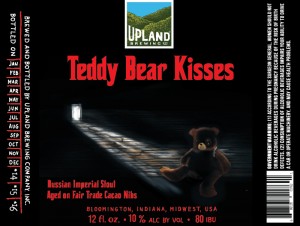 Bloomington, IN — Upland Brewing Co. announced today that Teddy Bear Kisses will be available for wholesale on draught and in 4-packs on September 15 and on tap at Upland locations on September 19.

Beer Description: A dark and robust beer brewed in the traditional stout method. Teddy Bear Kisses features an abundance of dark malts and high alpha hops for a powerful impact of roast, chocolate, and sweet bitterness. The lucky few who cuddle up to a warming session with Bourbon Barrel Teddy Bear Kisses, can sense the velvety malt character, balanced bitter intensity, and soothing chocolate notes created by long aging on fair trade cocoa nibs. This tasty brew is then aged in bourbon barrels giving it subtle vanilla and oak notes to warm you through the cold winter season.