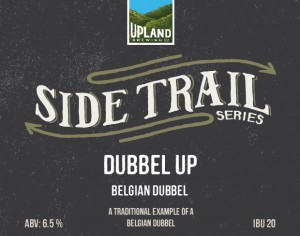 Bloomington, IN — Upland Brewing Co. announced today that Dubbel Up Belgian Dubbel will be released on draught November 22 at Upland retail locations.

Beer Description: This is a strikingly beautiful beer with a deep copper hue and bold ruby highlights and a unique wine like dark fruit character that can only come from dark Belgian candi syrup. The aroma is alive with fruity esters, sweet malt, grape, and cherry. A pruny, figgy, flavor with moderate dark caramel notes hints at fruity sweetness followed by a clean dry finish.