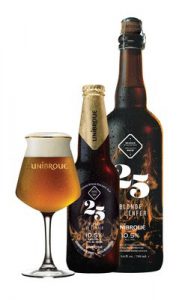 CHAMBLY, Quebec — This year, Unibroue is celebrating its 25th anniversary and, as a pioneer of brewing Belgian style ales in North America, is honoring its roots by offering its US fan base its own take on a classic style, the Belgian strong golden ale.

As is traditional for this style of beer, inspiration comes from hellish demons due to their lust power and the beer’s deceitful drinkability. 25e Blonde De L’Enfer (Blonde from Hell) is such a wolf in sheep’s clothing. It embodies a smooth, balanced beer that is refreshing and easy to drink, but with a surprisingly sneaky 10.5% alcohol which gives it finesse and complexity. It represents the very essence of Canada’s award-winning craft brewery, which has embraced traditional Belgian brewing methods since its first brew in 1992.

25e Blonde De L’Enfer is a delicious, complex, smooth ale with malty and citrusy flavors, topped with a pale straw head. The subtle balance of spice, malt, and hop flavors, combined with a fine, champagne-like effervescence, makes it the definitive beer for any Holiday feast, pairing perfectly with chicken or turkey and smoked fish. You can also serve it with soft cheeses (brie or camembert) or even with a sumptuous crème brûlée.

“Unibroue has embraced tradition and craftsmanship since its very beginnings,” explains Jerry Vietz, Brewmaster at Unibroue. “So, I’m thrilled to offer our American fans an authentic, quality beer for the Holidays, the season for warm gatherings with friends and family.”

A pioneer in its field, Unibroue was the first Quebec based craft brewery to offer unique-tasting Belgian style ales in North America, thus paving the way for other talented brewers. In the past 25 years, the team has seen changes and shifts in the beer industry as an opportunity to evolve and reinvent itself, while remaining faithful to its heritage of time-honored Belgian style craftsmanship.

25e Blonde De L’enfer will be available at the beginning of November, for a limited time and only in the U.S. in 12 oz. bottles (four-packs and Sommelier Section variety six-packs), 25 oz. silk screened corked bottles and in Sixtel kegs at Unibroue retailers in the United States, as well as on tap in several bars and restaurants.

Brewing since 1992, Unibroue is the first brewery of its kind in North America. Located in Chambly, Québec, Canada, it brews over 15 different Belgian style ales and has won more than 315 international medals since its launch. Its refermented ales are brewed using traditional Belgian and European methods, perfected over the past two centuries by Trappist monks. For more information on Unibroue, visit www.unibroue.com.