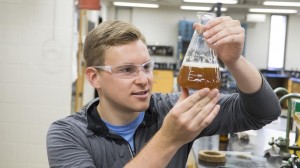 St. Louis, MO — Joseph Meisel is hoping to use beer to help demystify science and math for people sometimes intimidated by the curriculum.

This fall, the fourth-year PhD chemistry student at the University of Missouri—St. Louis, will offer a beer brewing course for credit at the university for non-science majors.

“I’m going to take something that a lot of people, especially college students, know about or think they know a lot about,” he said, chuckling. “And I’m going to tell them there’s actually a lot of science behind it, and this should be interesting to them.”

Meisel has been an avid home brewer for the past three years. He brews small batches — about 50 beers at a time in 5 gallon tanks. He recently bottled a Belgian tripel ale.

“My initial impression was that beer brewing was really simple, but the more I did it, the more I realized there’s a lot of science behind it,” he said. “I thought it might be something neat to try and use beer brewing to teach science. People don’t really know how much science goes into making even a simple light beer.”

Meisel proposed the course to Christopher Spilling, chair of the Department of Chemistry and Biochemistry at UMSL, who gave it his full backing. It also received the stamp of approval from the College of Arts and Sciences Dean Ron Yasbin.

Yasbin notes that many students are afraid of taking science and math courses and the beer brewing course is a great way to covertly teach those subjects without dumbing down the material.

“A brewing course exposes non-science majors to the same information about chemistry and biochemistry that they would have received from taking a ‘regular’ biochemistry course for non-majors,” Yasbin said. “But in this case, they don’t know that they are being taught this important information, and they enjoy the course because they are learning about a subject matter in which they are interested in. At the end of the course, not one student will think they learned about secondary metabolism or how it works. But, if you ask specific questions they will describe the process perfectly.”

Yasbin said UMSL is moving to more of these “applied sneaky” courses throughout its science and math curriculum.

“Our students will be better off because they actually learn the material while enjoying the course,” he said. “The creativity of our faculty and students like Joseph is the driving force behind this ‘sneaky’ but successful revolution.”

Students do not have to be 21 to enroll in the course — Chemistry 1021 Beer Brewing: Chemical and Biochemical Principles — but they’ll obviously have to be of age to consume alcohol.

“I don’t know if I should have a bouncer at the door to the lab,” Meisel laughingly said.

Depending on how many students enroll, they’ll either brew their own beer batch or pair up and have two students per batch. Meisel said he’ll have the students make different types of beers. In addition the students will take field trips to breweries — big and small — around town.

This course creation has been a great opportunity for Meisel who hopes to be a professor one day.

“While beer brewing is not in my professional future, having taught and having made my own course from scratch will be really good for me when I’m looking for a professor position.”