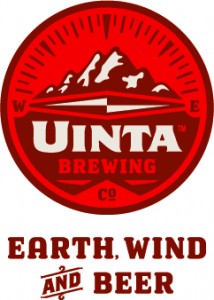 SALT LAKE CITY, UT – Uinta (you-in-tah) Brewing Company proudly unveils their new logo, a symbol that closely represents the meaning behind the name “Uinta” and exemplifies character of the company, as well.

Uinta Brewing Company, established in 1993, was named after the Uinta Mountain Range, the only major East-West running mountain range in the continental United States.To celebrate the uniqueness of its namesake, the new logo depicts a mountain range circumscribed by a compass dial highlighting the East and West coordinates.

The Compass is a tool which represents Uinta Brewing in several ways. The Uinta family prides itself on its sense of direction and focus on brewing quality, consistent beers. Additionally, as its beer names portray, Uinta appreciates the great outdoors that surround them in Utah and the entire Intermountain West. The compass speaks closely to the Uinta family’s sense of adventure and exploration, inside and outside of the brewery. This can be seen in surveying Uinta’s wide-ranging beer-styles, including its new exploratory series, the elegantly crafted Crooked Line.

The tagline, “Earth, Wind and Beer”, will remain married to Uinta’s logo, as it speaks directly to the responsible business practices with which Uinta is genuinely concerned: sustainability, commitment to renewable energy, and of course, crafting great beer.

Uinta plans to roll out this new logo gradually, primarily due to the fact that it will be updating eighteen years worth of the previous brand-identity. Stay tuned, and keep your eyes peeled for the new look!