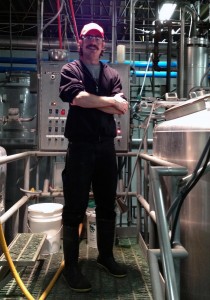 DAVIS, Calif. — For the fifth time in six years, a UC Davis Extension Master Brewers Program student has won the London-based International Institute of Brewing and Distilling’s prestigious JS Ford Award for the best overall performance on the Diploma in Brewing Exam.

“It’s a great honor,” said Minneapolis resident Ben Smith, a 2013 UC Davis Extension Master Brewers Program graduate. Smith achieved the top score, surpassing more than 200 students worldwide. He also took home the Brewers Engineers Association Engineering Award for the highest mark on the Module 3, Packaging and Process Technology exam. Administered by the Institute of Brewing and Distilling in London, the exam is a comprehensive test measuring theoretical knowledge of brewing science and technology; if passed, it is an international recognition of achievement.

“I love beer, number one. I enjoy the process of making beer,” explained Smith, who began as an avid homebrewer and quickly became interested in the science of fermentation with the hopes of turning his hobby into a career. Recognizing the Master Brewers Program as a way to distinguish himself in the industry, Smith turned to UC Davis Extension for the opportunity to expand his knowledge of fermentation and the associated technologies in the brewing trade.

“The program gives me a great base of knowledge to turn to in almost any circumstance that arises in the brewery,” said Smith, who this July began working as a shift brewer at the award-winning Surly Brewing Company—one of the breweries that inspired him to become a professional brewer. He praises the Master Brewers Program instructors’ undeniable passion and dedication to the program, especially Michael Lewis, Ph.D., UC Davis professor emeritus of Brewing Science and academic director and principal instructor of UC Davis Extension’s Professional Brewing Programs, and Charles Bamforth, Ph.D., D.Sc., Anheuser-Busch endowed professor of Malting and Brewing Sciences and distinguished professor at the University of California, Davis. “We have a lifetime of experience and deep knowledge to share with our students and a dedication to finding and educating the next generation of brewers,” said Lewis.

Armed with the knowledge and enthusiasm for all things beer, Smith is excited to embark on his career at Surly—which is currently building a $20-plus million Destination Brewery in Minneapolis—where he will be working by the end of next year. “Not only has Ben proven to be a super competent brewer in our manually operated brewhouse, he apparently has an incredible understanding of technical brewing!” said Todd Haug, head brewer at Surly Brewing. “He’s going to learn a lot on the job brewing alongside our team, but he clearly has the talent to develop into a great brewer here at Surly Brewing.”

“Brewing is a labor of love and hard work,” explained Smith. “But at the end of the day, you get to enjoy a tasty beverage that you made.”

UC Davis Extension, the continuing and professional education division of UC Davis, has been an internationally recognized leader in educational outreach for individuals, organizations and communities for more than 50 years. With more than 50,000 annual enrollments in classroom and online university-level courses, UC Davis Extension serves lifelong learners in the growing Sacramento region, all 50 states and nearly 100 countries.