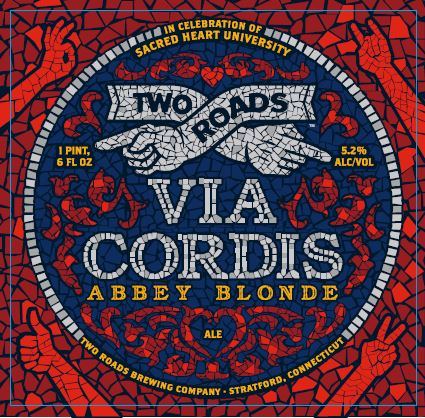 The beer makes its debut Friday, September 13, and is being called Via Cordis, Latin for “Road to the Heart”—a nod to both Two Roads and Sacred Heart University of nearby Fairfield, CT.

The beer is a golden-colored Abbey Blonde, or abbey single, and is fermented with yeast sourced from an active Catholic monastery brewery in Belgium. 70 barrels of Via Cordis were brewed and will be distributed in draft and 22oz bottles throughout Connecticut and Rhode Island via the brewery’s regular distribution network while supplies last. It will also be made available at Red’s, the university’s on-campus pub and at the brewery’s tasting room.

Via Cordis was crafted by Two Road’s Brewmaster Phil Markowski along with assistant Biology Professor Geffrey Stopper and former biology chair and associate professor Kirk Bartholomew. A portion of proceeds from sale of the beer will result in a donation to Sacred Heart University’s student scholarship fund.