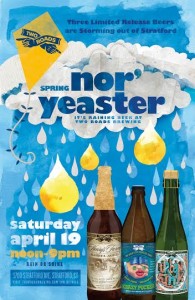 Urban Funk Wild Ale is the first of several planned releases from Two Roads’ Captured Yeast Series. With the help of nearby Sacred Heart University’s beer loving Biology Professors Kirk Bartholomew and Geff Stopper, a local yeast strain was captured and propagated for use in fermentation. The yeast was captured during the evening of Superstorm Sandy so it’s a particularly hearty strain of wild yeast! Urban Funk will be in corked 375ml bottles and truly funky with a unique, delicious sour flavor and an ABV of 5.6%.

Henry’s Farm Double Bock Lager Aged in Rye Whiskey Barrels combines rich, bready malt character with a smooth whiskey finish from barrel aging. This beer will be available in 22oz bottles and comes in at 7.8% ABV.

Phil Markowski, Brewmaster of Two Roads, commented, “Sour beers and barrel aged beers have always been intriguing and challenging to me, but these in particular have been fun to develop and I am pretty excited to see how our customers react. It takes a long time to do it right; we began working on some of these beers when we opened in December of 2012. Stay tuned, because we have a few others in the works.”

Markowski added “We did something unusual with our Henry’s Farm Double Bock in that we not only aged the beer in Rye Whiskey barrels but we also had the beer spend time in the barrels lagering at 35 degrees F. By the time it is bottled it will have spent 15 weeks cold-aging. This imparted unique barrel flavor while also imparting a smooth, clean lager character.”

Two Roads said they will release 690 bottles of each beer at $10 with a purchase limit of two bottles per person per style for a maximum of six bottles total. Bottles will be sold on a first come, first served basis. All three beers will be on draft that day in the brewery tasting room until supplies last.