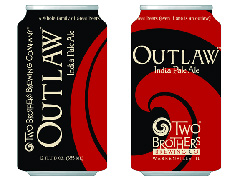 With the recent purchase of a new canning line, Two Brothers Brewing Company will be adding OutlawÔäó IPA in 12 oz. cans to their 7 year around 12 oz. bottle line up. Excited for the new opportunities that cans will bring, Co-Founder Jason Ebel says, “I look forward to enjoying OutlawÔäó on the golf course and while fishing this summer. Cans are a convenient package to take just about anywhere with you.” The can reads, “As bold as the name suggests but as friendly as the masked man, comes our first adventure into the world of cans. This IPA is full of citrus and pine hop character and aroma. The hop flavors play off the pleasant malt complexity like a good sidekick. Giddy-up.” In addition to the cans, OutlawÔäó India Pale Ale will be available on tap only at the Two Brothers Tap House in Warrenville and the Two Brothers Roundhouse in Aurora.

After living in France, brothers Jim and Jason Ebel developed a passion for flavorful specialty beer. After returning to the states, they had trouble finding that type of beer in Chicago so they opened Two Brothers Brewing Company in 1996. The brewery resides in a 40,000 square foot facility 30 miles west of Chicago where they completed their most recent and largest expansion in 2011. Two Brothers Brewing Company’s award winning products are currently available in Illinois, Minnesota, Ohio, Indiana, and New York.