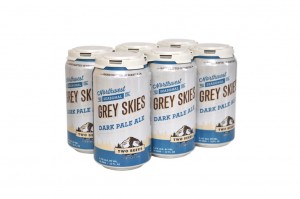 SEATTLE — While we love a sunny summer, it’s no secret Seattleites love the return of fall — rain, grey skies and all. Two Beers Brewing s newest seasonal, Grey Skies, is an ode to the weather we all crave, yet complain about come February. A dark pale ale, this Northwest seasonal is as easy drinking as it is flavorful, pairing well with cold days and long nights. Hitting taps and shelves around town beginning this Thursday, October 2, Grey Skies will soon be available on draft and in 12-ounce cans throughout Washington, Oregon, Alaska and Michigan.

“Each beer in our new line of seasonal brews was crafted to be enjoyed with the intricacies each Pacific Northwest season holds,” said Joel VandenBrink, founder of Two Beers Brewing. “Grey Skies follows Day Hike, our light and flavorful summer session ale, offering a style that’s perfect for chilly, fall days. Just wait until you see what we have for winter!”

Beautiful deep mahogany in color, Grey Skies offers a pleasant aroma of lemon, orange peel and caramel. Initially bursting with flavors of orange juice and grapefruit, this dark pale ale gives way to hints of peach and subtle toast. A nod to the Northwest weather and the flavors our beer drinkers have come to love, Grey Skies comes in at an approachable 5.1 percent ABV and 45 IBUs.

Two Beers Brewing will continue to distribute its six year-round offerings throughout fall and winter, as well as a host of limited edition packaged products. In addition to Grey Skies, craft beer enthusiasts can pick up Evo IPA, Immersion Amber and Trailhead ISA in 12-ounce cans, as well as 22-ounce bottles of Evo IPA, Pumpkin Spice Ale, Alta Series and more throughout Washington, Oregon, Alaska and Idaho.

About Two Beers Brewing Co. Two Beers Brewing Co. began operations in a small Seattle basement in 2007 and today, produces twelve unique beers including six year-round, six seasonal and a host of special releases in its 4,800-square-foot SoDo brewery. Two Beers Brewing can be found in Seattle-area bars and restaurants, with tastings kegs and growler fill-ups available at their tasting room located at 4700 Ohio Ave. S. in SoDo, open weekly Tuesday — Friday from 3-9 pm, Saturdays from 1-10pm and Sundays from 1-6pm. Select brews can also be found in 22-ounce bottles and 12-ounce cans through the tasting room, as well as local retailers in Washington, Oregon, Alaska and Northern Idaho. For more information, visit www.twobeersbrewery.com.