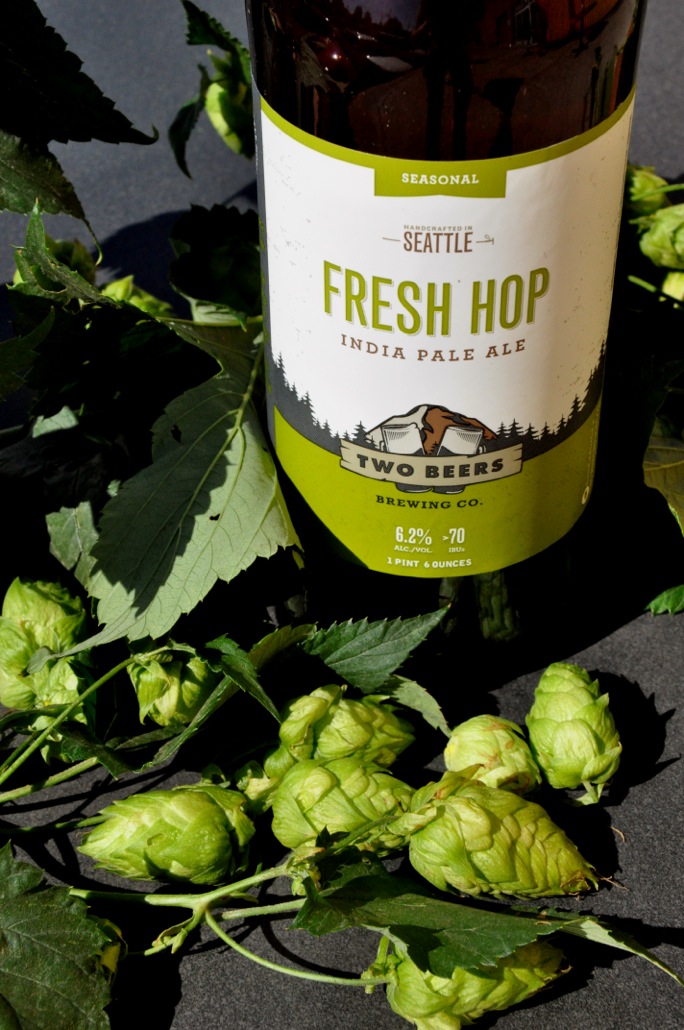 SEATTLE — Today, Two Beers Brewing announced the release of its most anticipated beer — Fresh Hop Ale — has been scheduled for this Friday, August 30 at The Woods tasting room in SoDo.

A hyper seasonal, the expanding brewery’s Fresh Hop Ale is know for its intense hop flavor and unique brewing process, which involves a same-day round trip to Yakima, four hours of picking fresh hops off the vine and a 24-hour brewing process. The first beer of its kind released in 2013, the Two Beers Brewing 2013 Fresh Hop Ale will be available on tap and in 22-ounce bottles to the delight of Washington, Oregon and Michigan hopheads.

“The creation of this beer is an annual tradition for the Two Beers Brewing team. We get a call that the hops are ready and by that night, we’re in the field pulling the vines down ourselves,” said Joel VandenBrink, founder and head brewer of Two Beers Brewing. “We enjoy the work that goes into this beer, the tribute it pays to Washington-grown hops and the chance it provides for the public to get involved.”
First brewed in 2009, Fresh Hop enters its fifth season on the brewery’s fall lineup. This Northwest-inspired brew’s strong citrus aroma — featuring hints of grapefruit and passion fruit — can be attributed to the freshly picked Yakima Valley-grown Centennial hops from Puterbaugh Farms used to create it. Dark straw in color with light caramel malt tones, Fresh Hop 2013 settles in at 6.2 percent ABV resembling an aggressively dry-hopped IPA, but packing the punch only fresh hops can deliver. In addition to Centennial hops, this beer features locally grown Simcoe, Amarillo, Cascade and Experimental hops, helping this popular beer achieve its bright and delightfully bitter flavor.
To celebrate its release, Two Beers Brewing will have its 2013 Fresh Hop Ale on tap on August 30 at the brewery’s newly expanded and renovated tasting room — The Woods — with pints available for $6. For enjoying at home, 22-ounce bottles will be available for $6. Popular food truck Evolution Revolution will be on-site offering up delicious New America street food for purchase. As an added bonus, those who purchase food and show their receipt will receive $1 off their first year round beer (excludes seasonals and Fresh Hop Ale).
Outside of The Woods, now open on Sundays from 1-6pm, Two Beers Brewing’s 2013 Fresh Hop Ale will be available in 22-ounce bottles at retailers throughout Washington, Oregon and Michigan — including Whole Foods, QFC, PCC, Central Markets and more — beginning September 3. Find it on tap throughout September in Seattle area bars and restaurants. Availability at special Fresh Hop events to be announced via Facebook.
About Two Beers Brewing Co.
Two Beers Brewing Co. — makers of Evolutionary IPA and a host of Northwest-inspired beers — began operations in a small Seattle basement in 2007. Today, Two Beers Brewing produces twelve unique beers including five year-round, seven seasonal and a host of intricate infusions in its 4,800-square-foot SoDo brewery. Two Beers Brewing can be found in Seattle-area bars and restaurants, with tastings kegs and growler fill-ups available at their tasting room located at 4700 Ohio Ave. S. in SoDo, open weekly Tuesday — Friday from 3 p.m. to 8 p.m. and Saturdays & Sundays from 1 — 6 p.m. Select brews can also be found in 22-ounce bottles and 12-ounce cans through the tasting room, as well as local retailers in Washington, Oregon, Alaska and Northern Idaho.