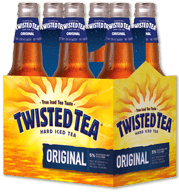 CONCORD, N.C. — Richard Petty Motorsports (RPM) announced today the company will partner with the Twisted Tea Brewing Company on its No. 9 NASCAR Sprint Cup Series Ford team beginning in 2014. The hard iced tea brewer will be an associate sponsor of the car driven by two-time Cup Series winner Marcos Ambrose during the 2014 season. In addition, Twisted Tea will serve as a primary sponsor of the team at Dover International Speedway during the fall race event.

Twisted Tea offers hard iced tea in eight flavors, all brewed to taste like real iced tea. Their logo will appear on the roof position of the No. 9 Ford for 18 events in 2014 along with the primary sponsorship at Dover. Twisted Tea found a kindred spirit in Ambrose, a driver known for enjoying a few twisted hobbies of his own, including panning for gold and karting.

“Marcos and NASCAR really fit our brand,” said Jon London from Twisted Tea Brewing Company. “Marcos is always a threat to win on the tracks, and he has a little fun off the track just like our drinkers. Plus, NASCAR is a great atmosphere, and our drinkers love it. So we’re looking forward to partnering with Richard Petty Motorsports and Marcos and to share that experience with our own fans across the country.”

Ambrose will be entering his fourth year with RPM and the No. 9 race team in 2014. Since coming to the United States from Australia, the driver has proven to be a winner on the track and one of the sport’s most popular and likeable personalities.

“It’s a great day for Richard Petty Motorsports and our No. 9 race team,” said Ambrose. “Next year is really shaping up to be a solid season with our race team only getting stronger. I think it’s a great time for Twisted Tea to come on board and we’re going to have a lot of fun together. I’m really looking forward to their partnership and driving our newly painted yellow #9 car.”

Twisted Tea and Richard Petty Motorsports will bring this sponsorship to the race fans nationally through promotions across the country in bars, convenience and grocery stores, and a national sweepstakes that will allow one consumer and three of their closest friends to win the opportunity to be honorary crew members of the No 9 race team.

Brian Moffitt, chief executive officer of Richard Petty Motorsports, sees Twisted Tea as a great partner for RPM and the sport of racing. “Any time we can welcome a great product to NASCAR through Richard Petty Motorsports it’s already a win,” said Moffitt. “Twisted Tea will make our organization even better, but also make the race experience for our fans so much more fun and engaging. New fans will be introduced to Marcos and RPM through Twisted Tea’s engaging retail and consumer activation.”

A performance and marketing driven company, Richard Petty Motorsports, co-owned by NASCAR Hall of Famer Richard Petty and successful business entrepreneurs Andrew Murstein and Douglas Bergeron, is one of the most recognized brands in all of motorsports. With a history of over 200 wins and business partnerships with national and global leaders, today the race operation fields two teams in competition in the NASCAR Sprint Cup Series. Aric Almirola pilots the famous No. 43 Ford Fusion with primary partners Smithfield Foods, U.S. Air Force and STP and Marcos Ambrose drives the No. 9 machine with primary partners Stanley and DEWALT. In addition, Michael Annett wheels the No. 43 Pilot Flying J Ford Mustang full-time in the NASCAR Nationwide Series. The team is headquartered in Concord, N.C.