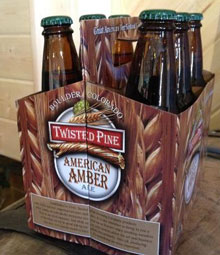 BOULDER, CO – On Sunday, November 11th, Twisted Pine Brewing Company will celebrate Veterans Day by giving away free six packs of American Amber Ale to those who serve or have served in the United States military.

Brewery owner Bob Baile speaks of the gesture as “a small token of our appreciation for the brave men and women who put their lives on the line for this nation.” Twisted Pine’s Ale House is open 11am-8pm on Veterans Day, and the brewery will dole out a free six pack to anyone who presents a valid military ID.

Based in Boulder, Colorado Twisted Pine Brewing Company has been handcrafting beer since 1995. They are the brewers of such favorites as “Hoppy Boy IPA,” “Raspberry Wheat Ale” and “Billy’s Chilies.” The Ale House is a very popular local hangout and boasts 17 taps, 5 rotating. Twisted Pine is active with local charitable organizations and a strong believer in sustainable business practices. You can find more information at www.twistedpinebrewing.com.