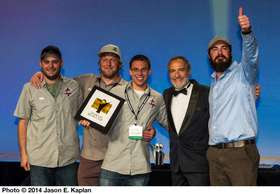 Boulder, Colorado — “This is, has been, and will be one of the best beers in the country,” writes Dow Scoggins, chairman of the board governing the U.S. Open Beer Championships and editor of BeerInfo.com, in a recent article on the site. The beer so referenced is Big Shot Espresso Stout, brewed by Twisted Pine Brewing Company in Boulder, Colorado and gold medal winner at last week’s World Beer Cup in Denver.

The World Beer Cup is considered the most prestigious international beer competition and this year played host to over 1400 breweries from 58 countries. Sorted into 94 categories and evaluated in blind tasting format, a total of 4754 beers were judged by a panel of 219 judges from 31 countries. A major surprise to many involved, though, was the escalation of entries in the Coffee Beer category, up 95% over the previous World Beer Cup in 2012 making it the fourth largest category this year with 109 submissions.

Once used almost exclusively in rich, dark beers like stouts and porters, crafty brewers are now introducing coffee beans into recipes ranging from K├Âlsch and IPAs to brown ales and barleywines. But despite the recent expanse of experimentation and subsequent surge of contenders, stouts still regularly dominate the podium at the major competitions. And Big Shot has become somewhat of a fixture on this award circuit. This year’s gold award joins a previous World Beer Cup silver, along with three medals from the Great American Beer Festival and two U.S. Open golds in Big Shot’s growing collection of hardware.

When asked to explain the rising popularity of coffee beers, Sales & Marketing Coordinator Justin Tilotta points out that “the craft boom is not confined to beer alone, it’s this whole movement of people looking local for quality goods. With so many smaller scale coffee roasters experiencing success and operating in the same neighborhoods as craft breweries, it’s only natural that collaborative relationships should develop between the two.”

Twisted Pine relies on the nearby Unseen Bean for the Peruvian coffee used to make Big Shot. The beans are roasted and ground mere hours before the brewers begin their steeping process, lending a fresh flavor that truly speaks to the benefit of local partnership. And the fruits of that community collaboration can now be enjoyed outside the Boulder bubble, as the brewery is currently distributing kegs and 22oz. bottles to select markets in 15 states.

Based in Boulder, Colorado, Twisted Pine Brewing Company has been hand-crafting quality ales since 1995. In addition to such favorites as Hoppy Boy, Raspberry Wheat Ale and Billy’s Chilies, the brewery has repeatedly pushed the boundaries of style guidelines with such creations as Big Shot Espresso Stout, Northstar Imperial Porter and Ghost Face Killah. Twisted Pine is actively involved with local charitable organizations and is a staunch advocate of sustainable business practices. For more information, visit www.twistedpinebrewing.com.