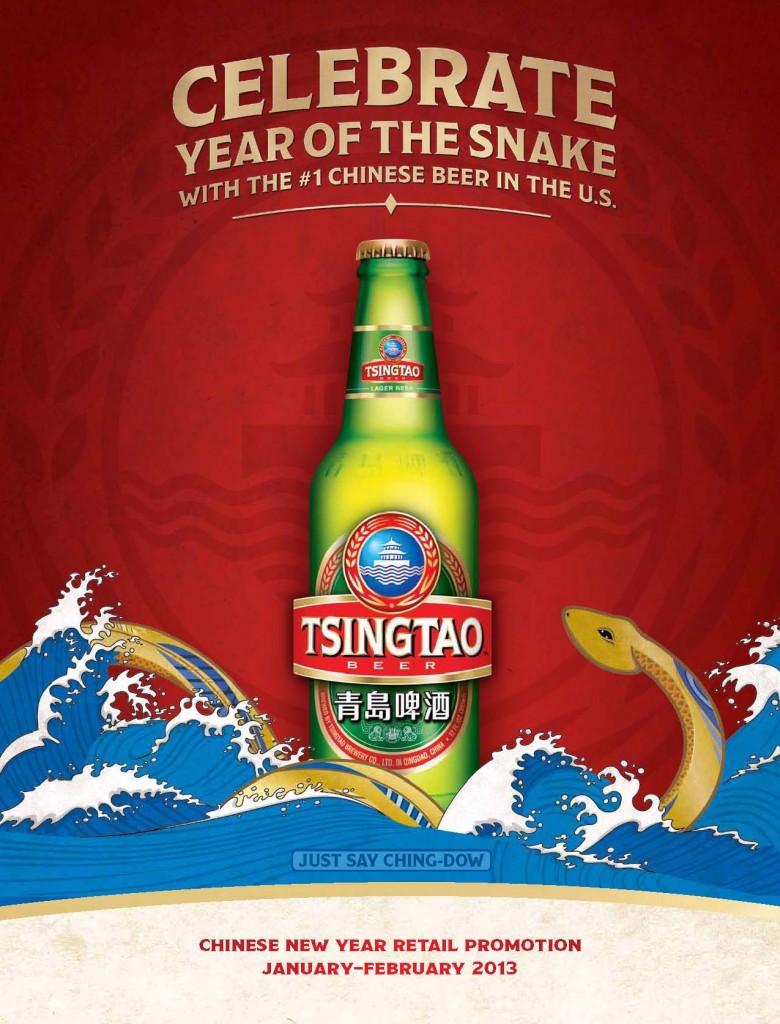 CHICAGO — Retailers can celebrate Chinese New Year and ring in increased sales and profits by leveraging Tsingtao Beer’s 2013 “Year of the Snake” on- and off-premise promotion, which runs in January and February 2013. This is Tsingtao’s largest promotion of the year in celebration of Chinese New Year, which starts on February 10 and continues until the end of the month.

The Year of the Snake is a time to celebrate and cultivate the animal’s most noble trait: wisdom. It is something we could all use a little more of, and it’s brewed into every bottle of Tsingtao. For 2013, the number one Chinese beer in the U.S. is happy to oblige, giving consumers many fun ways to wise up with every sip of Tsingtao.

Tsingtao Lager will be featured on all-new thematic point-of-sale items to reinforce the brand’s authenticity with the Asian market while celebrating the Year of the Snake and informing the General Market, during its number one selling period.

Chinese New Year is the number one celebrated Chinese holiday in the U.S. and Tsingtao is one of a few leading Asian beers still brewed in its country of origin (since 1903).

“During the Chinese New Year holiday, retailers are looking for easy to execute POS and local activation ideas that get consumers excited,” said a Crown Imports representative, Tsingtao’s U.S. importer. “We encourage on- and off-premise accounts to take full advantage of this unique promotional opportunity to increase sales while providing consumers with an authentic Chinese beer to celebrate the ‘Year of the Snake’.”

For the off-premise, Tsingtao offers a variety of 2013 “Year of the Snake” point-of-sale items sure to generate consumer excitement at retail, including bi-lingual (English and Chinese) POS, Asian market and Total Market templates, large and small format displays, sampling programs in key markets and value-added cross-merchandising offers. And for the first time, Tsingtao will have custom “Year of the Snake” packaging for 6, 12 and 24-packs, to drive excitement around the brand during Chinese New Year, and to increase trial.