In a crowded beer marketplace, a quality product, vivid packaging or an active social media presence often are not enough for a company to capture consumers’ attention. Now more than ever, both established companies and early-stage craft breweries are turning to new technology to help them cut through the noise.

One way that beer companies are trying to stand out is through the use of augmented reality (AR) technology. AR’s image recognition technology allows brands to animate their already existing packaging using an app or webpage, making everything from a singing striped bass to an 18th-century convict come to life on phone screens.

For some established brands, augmented reality provides an easy opportunity to entertain and connect socially with consumers.

“Augmented reality was just seen as a logical next step to help celebrate the occasion and interact with fellow aficionados in an authentic way,” Lafferty said.

According to Lafferty, the company was testing the technology, and the primary goal with the AR experience was to “add to the fun.”

Meanwhile, Treasury Wine Estates (TWE), which makes the 19 Crimes wine offerings that feature stories of British convicts banished to Australia in the 18th and 19th centuries, has taken a similar approach. The company recently entered the beer market, launching three craft styles last month. The brand’s AR experience animates the convicts’ images on the labels to tell the tales of their banishment using the “Living Labels” application. The beers currently feature three convicts’ stories previously used on its wine labels, though TWE is considering creating a distinct AR experience for its beer line.

According to Ming Alterman, director of digital for TWE, the company was looking for a way to stand out in a crowded craft marketplace and turned to AR “to tell the 19 Crimes story in the most vivid way possible.”

A main focus for 19 Crimes is making an interactive experience for consumers beyond just a talking head or a 30-second video.

“A thing with our experiences that we’re looking to do is ‘how can we give users a reason to come back?’” Alterman said.

“Ours is kind of the opposite,” he said. “We’re not gonna be talking off the beer can about brewing beer.”

Angry Orchard’s app, which launched last month, provides tasting notes, pairing advice and recipes for appetizers, entrees and desserts, when a smartphone is pointed at the label.

Burk added that Angry Orchard plans to continue to update and evolve the content with new recipes and recommendations.

“This is an ever-evolving platform, and we’re just getting started,” he said. 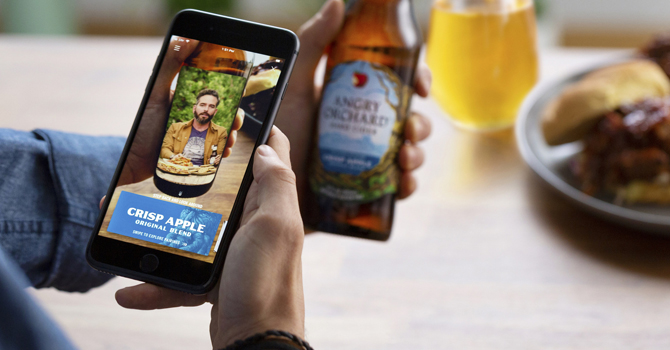 The technology behind AR involves “creating a mask that mimics the label from a 100 percent scale,” Alterman said. The AR app then brings the graphic to life when a camera phone is pointed at the label. The process requires a team and investment, he said, and the app itself needs continual upkeep, including monthly updates in the Apple and Google Play stores.

For small craft breweries and emerging brands, AR technology provides a crucial opportunity to share information about the product and brewery with new customers without cluttering packaging.

In an effort to more uniquely communicate its message, Newport Beach, California-based Chihuahua Cerveza began implementing app-based AR last July to establish a point of difference from other brands. The company recorded more than 30 videos for its AR experience, featuring bartenders sharing beer-cocktail recipes, and introducing new content weekly in an effort to drive continual consumer interest. As a newer brand with less money to spend, Chihuahua has used AR to articulate its brand message in a more personalized and flexible way.

“We’re Chihuahua Brewing for a reason — we do Mexican lagers, but we’re a small dog with a big bark,” co-founder and president Phil Jamison said. “We’re fighting against the big dogs. We have to find a way to communicate and connect with those consumers.”

As Chihuahua expands distribution to Florida this month, Jamison said the AR will serve as a central part of its marketing campaign to communicate the brand’s message to a new audience.

“It’s a whole different perspective than watching a TV commercial or looking at a billboard,” he said. “You’re holding a bottle or you’re holding a can in your hand and you’re getting that brand message while you have it right there.”

Anheuser-Busch-owned Devils Backbone has taken a similar approach, turning to AR to stand out after undergoing a packaging refresh.

“As we were designing the packs, a lot of the more interesting background stories or nuggets about the charities we work with, we didn’t have that much room left over on the packs to be able to include those,” Devils Backbone marketing director Marisa Black said. “We were looking for alternative ways to storytell.”

Devils Backbone partnered with advertising firm R&R Partners to create the AR experience, but Black declined to share the cost of creating and implementing the technology, which took about six weeks.

Since this is most beer brands’ first foray into AR, there are few benchmarks to measure the success of the endeavor, though key performance indicators (KPIs) can give brands a taste of how many people are engaging with the platform.

TWE, which currently only sells the 19 Crimes beer in Ohio, is able to track who engages with the app on a city and state level. It plans to use that data while planning a potential national expansion of the brand.

For its part, Devils Backbone has seen promising numbers for initial use as well as ongoing engagement since it unveiled its AR experience. In stores with augmented reality displays, Black said the brewery is seeing a “double-digit lift.”

“We’ve seen really great download rates over the last 30 days,” Black said. “There’s been over 5,000 consumers that have watched the augmented reality, and then we have close to 1,000 active users of the app that are continuing to go in and share the AR when they’re bringing home a pack.”

Not focusing on immediate numbers, Jamison said he views this technology as a long-term marketing strategy for Chihuahua.

“We’re not looking at it as instant return, instant gratification like, ‘If this doesn’t work in a week, we’re gonna scrap this,” he said. “This is a tool we can use to develop the brand over the next three-to-five years.”

The Future of AR

“I would say [AR is] one of the hottest things from a product perspective that we’re working with brands on,” he said. “We have new brands approaching us on a weekly basis asking for opportunities to engage with AR.”

R&R Partners has developed AR experiences for Boeing, Facebook, the “Life is Beautiful” music festival and the city of Las Vegas. Mason noted that investments made by companies such as Facebook, Google and Apple in AR technology could indicate the trend’s staying power. In addition, the majority of the population already has smartphones with cameras and AR capabilities, allowing a lower barrier for entry for people to engage with it.

“The challenge now is brands finding a way to activate the technology that’s already there,” Mason said.

Some brands are doing just that, pushing the boundaries of AR to cut through what Mason called “SKU-mageddon,” especially as more and more brands jump on the AR bandwagon. 19 Crimes is exploring the possibility of voice recognition to bring its labels to life. Chihuahua Brewing is pursuing a similar venture, working on an AR experience that would allow consumers to give the label’s titular dog voice commands.

As companies continue to push forward on innovations, Mason predicted that the beer aisle could soon experience an AR takeover.

“There will just be an expectation that everything has an augmented-reality layer,” he said. “I think that consumers might be able to walk down that same beer aisle two years from now and be able to scan along the entire row of packaging, and be able to get at least some contextual information, if not a full brand story off every single thing that’s there.”

Somerville Brewing Permanently Closes, Assets to be Sold at Auction; Base Camp Folds