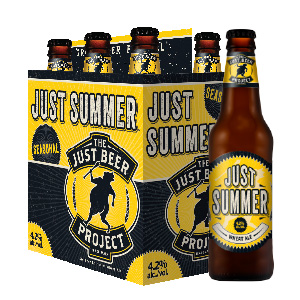 Burlington, VT — After a Polar Vortex winter, and a finicky groundhog’s foresight, beer drinkers everywhere are ready for something to accompany them into the season designed for simplicity and social activities.

In the spirit of warm weather, The Just Beer Project is launching its first seasonal beer, Just Summer. Just Summer is a lightly hopped, sessionable wheat ale, lower in alcohol (4.2% ABV), to take drinkers from poolside to campfire and everything in between. For the person who’s looking for a social ale that doesn’t sacrifice flavor, Just Summer is the perfect beer for the season.

“We’ve taken the same concept of ‘sessionability’ that has become so popular among the IPA category, and introduced it to a beer style that speaks to summer,” says Alan Newman, founder of The Just Beer Project. “Summer is synonymous with full days and longer nights, so what better way to enjoy the greatest season than with a Just Summer.”

The Just Beer Project’s flagship, Anytime IPA, has been rolling out into select areas since May 2013. Just Summer is the second in the Project’s lineup, whose mission is to brew kick ass beer that won’t kick your ass (all under 5% ABV), that focus on a delicious malt to hop balance, and crafted not to suck.