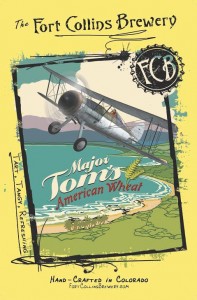 Fort Collins, Colo. — The Fort Collins Brewery, along with Gravity 1020 Modern Tavern has announced that Major Tom’s American Wheat will transition from a full time brew into a summer seasonal beginning August 2014.

The unique creation infused with real pomegranates and filtered to a bright finish, has been a part of FCB’s full time lineup for the last nine years and the namesake holds a special meaning to FCB’s co-owner Tom Peters.

To keep up with the growth of FCB, Tom Peters sold his private airplane in 2004 to fund the brewery’s first packaging line. The brew, a favorite of Tom’s, started in FCB’s tasting room and shortly after was introduced to the full time lineup. To commemorate the occasion it was rightfully named Major Tom’s.

“Major Tom’s has become a defining brew for us over the last number of years,” said FCB’s Owner, Tom Peters. “As the days get warmer and the time for flying get’s longer, Major Tom’s popularity spikes significantly, where we feel the transition into a summer seasonal makes the most sense.”

Once a seasonal, Major Tom’s will release in May of each year and will remain packaging in 6-packs, as well as on draft.