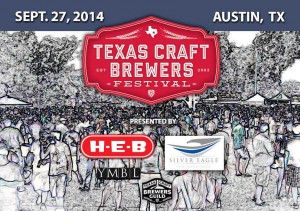 Austin, TX — The most Texas craft brewers ever are participating in this year’s Texas Craft Brewers Festival, held September 27 in Austin. Of the over 50 participating brewers, ten are Texas brewpubs, allowed to join en masse for the first time in years, thanks to law changes enacted in 2013.

Presented by H-E-B and Silver Eagle Distributors, and produced by the Young Men’s Business League of Austin and the Texas Craft Brewers Guild, the festival is the state’s largest craft beer event focused exclusively on Texas-produced craft beer.

When the Texas Craft Brewers Festival was founded in 2003, brewpubs were allowed to participate in festivals, but a reinterpretation of state laws resulted in their banishment from participation in all festivals in Texas.

In 2013, efforts by the Texas Craft Brewers Guild, a 501(c)(6) nonprofit representing the Texas craft brewers, along with other interested parties, led to the passage of legislation that allows brewpubs to once again join bretheren breweries and be represented en masse on the festival grounds.

Following the law change, brewpubs tried to make it to the Texas Craft Brewers Festival last year, but the timeline to meet all required regulations was too tight. This year is a different story.

“The ten brewpubs involved this year hail from different regions, with most launching in the last couple of years,” says Vallhonrat.
“Considering that regulatory requirements remain challenging, these ten have accomplished something impressive in a short period of time. We definitely expect the numbers of brewpubs participating in the Texas Craft Brewers Festival to grow from here.”

Participation in the festival overall has experienced double-digit, year-over-year growth since the Guild revived the event in 2011 after a five-year hiatus.
This year, 57 brewers are participating in the Texas Craft Brewers Festival compared to 37 in 2013, a 54% increase. That 2013 figure was a 35% jump from 2012, and followed a 55% year-over-year increase from 2011.

Vallhonrat says this growth is a direct reflection of the booming Texas craft beer industry. The Texas Craft Brewers Guild reports annual output from brewers who produce under 225,000 barrels a year — the majority of Texas craft brewers — jumped 44% in 2013.

The Texas Craft Brewers Festival benefits Austin Sunshine Camps, a 501(c)(3) nonprofit providing mentorship, education and personal development for high-potential, low-income girls and boys throughout Central Texas. The event is made possible by the generous support of H-E-B and Silver Eagle Distributors along with:

About the Texas Craft Brewers FestivalÔÇ¿

About the Young Men’s Business League of Austin

ÔÇ¿Founded in 1913, the Young Men’s Business League is one of the oldest and most respected social service organizations in Austin. The organization operates community programs through Austin Sunshine Camps, its 501(c)(3) nonprofit providing mentorship, education and personal development for deserving children throughout Central Texas.

About the Texas Craft Brewers Guild