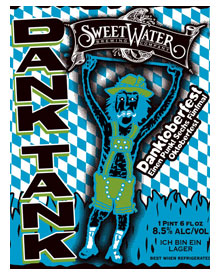 ATLANTA — SweetWater’s devilishly talented brewers are at it again. Just in time for a fall release, the boys have banded together to brew the first true lager style beer to come from the South’s second largest craft brewer. Danktoberfest, a high gravity Oktoberfest-style brew, is the latest creative brain-child to come from the brewery’s infamous Dank Tank series.

This full-bodied lager delivers a malty taste and bready aroma, packed with zesty hops and huge amounts of heat. Weighing in at a whopping 8.5% ABV, Danktoberfest is brewed with German malts and hops to include: Pilsner, Munich, Cara Munich, Aromatic, Dark Munich malts; and German Perle and Hallertau Mittelfruh hops.

Danktoberfest will be packaged in 22-ounce bottles and hit shelves in select locations starting the first week of October. Samples will also be available on draft at SweetWater’s Tasting Room on select tour dates. Fans should act fast and save some for the cellar. Mr. Dankenshnitzel won’t last long.

“We are excited to be able to break through our ‘ale wall’ and get our hands dirty with some serious lagering,” said SweetWater Head Brewer Nick Nock. “Carrying on the Oktoberfest tradition, we used fine German malts and hops, while adding in our own dankness to give it a classic SweetWater spin.”

SweetWater’s Dank Tank lineup is a series of rarely released beers from the hombres of headiness. These occasional treats from the dark side of SweetWater’s soul emerge from the brewery’s experimental one-hitterÔÇªthe Dank Tank. Brewed only when the itch gets so bad, they just have to scratch it.

SweetWater Brewing Company is an Atlanta?based craft brewery specializing in aggressive West Coast style beers. SweetWater’s brews are unpasteurized and designed to be consumed fresh so distribution is limited to the Southeast. The award?winning lineup of year?round brews includes SweetWater 420, IPA, Exodus Porter, Blue, LowRYEder and Georgia Brown. SweetWater also features a Catch and Release series of beers available on a limited basis throughout the year, and an experimental, one?time?only Dank Tank series. The SweetWater Brewery, open for tours every Wednesday, Thursday and Friday from 5:30?7:30 p.m. and Saturdays from 2:30?4:30 p.m., is located at 195 Ottley Dr. NE, Atlanta GA 30324. For more information about SweetWater Brewing Company, please visit www.sweetwaterbrew.com. For more of a social relationship with SweetWater Brewing Company follow @sweetwaterbrew on Twitter and become a fan on Facebook: www.facebook.com/sweetwaterbrew