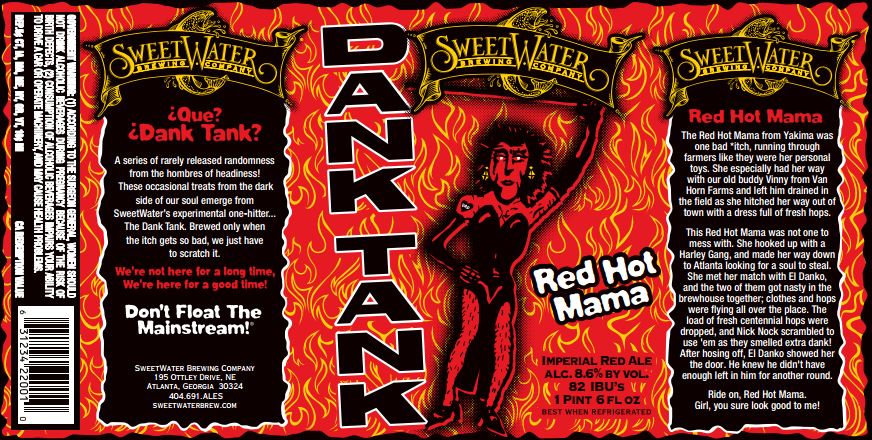 ATLANTA — SweetWater’s Dank Tank is bringing the heat with its steamy new limited-release, Red Hot Mama. Brewers hopped up this Imperial Red Ale to draw out some fierce flavor with a super smooth finish. Red Hot Mama will roll out red-hot onto shelves the week of Oct. 14.

Story goes, Red Hot Mama was one bad chick who liked to have her way with the boys on the farm. She used and abused one particular hop farmer before hitchin’ a ride to Atlanta with a dress full of fresh hops. While looking for a new soul to steal, she met her match with El Danko. When things got steamy, clothes and hops flew all over the brewhouse. The load of fresh Centennial hops was scooped up by SweetWater’s brewers and the rest is history!

“Red Hot Mama is a hop forward Imperial Red, with a malty sweetness on the nose,” said SweetWater Head Brewer Nick Nock. “It gives a beautiful tingle on the tongue, starting really big from the fresh hop additions, and then finishing low and slow.”

Fans will find the beer on draft taps and in 22-ounce bombers at participating accounts and retailers throughout the Southeast. Red Hot Mama will be riding on though, so drinkers are reminded to get their hands on this good lookin’ gal before she’s gone.

SweetWater Brewing Company is an AtlantaÔÇÉbased craft brewery following the motto “Don’t Float the Mainstream!” SweetWater’s brews are unpasteurized and designed to be consumed fresh so distribution is limited to the Southeast. The awardÔÇÉwinning lineup of yearÔÇÉround brews includes SweetWater 420, IPA, Blue, LowRYEder and Georgia Brown. SweetWater also features a Catch and Release series of beers available on a limited basis throughout the year, and an experimental, oneÔÇÉtimeÔÇÉonly Dank Tank series. SweetWater Brewery, open for tours every Wednesday, Thursday and Friday from 5:30ÔÇÉ7:30 p.m., and Saturdays and Sundays from 2:30ÔÇÉ4:30 p.m., is located at 195 Ottley Drive in Atlanta. For more information about SweetWater Brewing Company, please visit www.sweetwaterbrew.com. For more of a social relationship with SweetWater Brewing Company follow @sweetwaterbrew on Twitter and Instagram, and become a fan on Facebook at www.facebook.com/sweetwaterbrew.