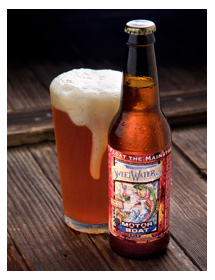 ATLANTA — Motor Boat is cruising on back into SweetWater’s Catch and Release lineup, dropping anchor this August. The slap-you-silly brew is SweetWater’s titillating version of an Extra Special Bitter (ESB), naturally built for speed and comfortÔÇªfor the old sailor in everyone.

Motor Boat is brewed with Cascade, Sterling and US Golding hops, and dry-hopped with Cascade for a little extra action. Big in body, this unfiltered beer boasts complex malt character and finishes with 42 IBUs and 5.6% ABV.

The brew will hit shelves throughout the Southeast in mid-August. It will be featured in six-packs of 12-ounce bottles and will be flowing on tap at bars and restaurants.

This decorated brew has a proven track record with back-to-back silver medal wins at the Great American Beer Festival. So batten down the hatches, prepare your party barges and drink up while you can, ‘cause Motor Boat will be sailing off into the sunset this October.

Sad to see it go? Don’t fret. SweetWater’s got your back with the debut of its newest addition to the year- round lineup, a rye India Pale Ale (IPA) just around the corner. LowRYEder has been creeping out on select draft taps throughout the summer, but this flame-throwin’ IPA will make its official debut in six-packs on shelves throughout the Southeast early this fall. Stay tuned for more info on the brew and details about how the SweetWater folks are hopped up on hydraulics to make this brew’s launch party larger than life.

SweetWater Brewing Company is an Atlanta?based craft brewery specializing in aggressive West Coast style beers. SweetWater’s brews are unpasteurized and designed to be consumed fresh so distribution is limited to the Southeast. The award?winning lineup of year?round brews includes SweetWater 420, IPA, Exodus Porter, Blue, LowRYEder and Georgia Brown. SweetWater also features a Catch and Release series of beers available on a limited basis throughout the year, and an experimental, one?time?only Dank Tank series. The SweetWater Brewery, open for tours every Wednesday, Thursday and Friday from 5:30?7:30 p.m. and Saturdays from 2:30?4:30 p.m., is located at 195 Ottley Dr NE, Atlanta GA 30324. For more information about SweetWater Brewing Company, please visit www.sweetwaterbrew.com. For more of a social relationship with SweetWater Brewing Company follow @sweetwaterbrew on Twitter and become a fan on Facebook: www.facebook.com/sweetwaterbrew.