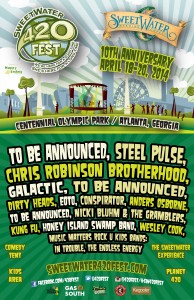 ATLANTA, GA — SweetWater 420 Festival, Atlanta’s most dynamic and celebrated Earth Day event, will return this April to a new home in the heart of the city at Centennial Olympic Park. The weekend-long festival is celebrating 10 years and will be jam-packed with a diverse lineup of events and entertainment for the entire family including live musical performances on two stages, a comedy tent, local artist market, Planet 420 non-profit and environmental village, KidZone, EDM stage, SweetWater craft beer experience tent, food trucks and more!

“SweetWater 420 Festival is an unbelievable opportunity for us to bring all of the brewery’s passions together in one great festival environment,” said Director of Marketing at SweetWater Brewing Company, Steve Farace. “As we celebrate our 10th anniversary, we are laying the foundation of the festival’s future in our new home at Centennial Olympic Park, and we are looking forward to what’s in store.”

From headlining artists to hometown favorites, fans can expect to get funky with the following this April: Steel Pulse, Chris Robinson Brotherhood, Galactic, Dirty Heads, Eoto, Conspirator, Anders Osborne, Nicki Bluhm & The Gramblers, Kung Fu, Honey Island Swamp Band, Wesley Cook, Music Matters Rock U Kids Bands: In Trouble, and The Endless Energy. Important to note, the ink is still drying on two main stage headliner acts for the weekend lineup, but they will be announced within the upcoming weeks on the SweetWater 420 Festival Facebook page.

Festival guests won’t be starved for food or culture either. The weekend will be packed with bites from local foodie favorites, plus an artist market showcasing creations from some of the regions’ most-talented craftspeople. Back by popular demand, Saturday will feature a SweetWater 5K run ending at the festival site, along with Gas South’s cornhole tournament playoffs on festival grounds.

420 Fest will once again offer a variety of social and eco-friendly events and activities for guests of all ages. Planet 420 returns, housing dozens of non-profit and environmental organizations offering exhibits and workshops promoting green practices for the home, as well as the opportunity to get involved in giving back to the community, who gives so much to us.

Kiddos can enjoy the KidZone presented by Chipotle Mexican Grill Saturday and Sunday for sustainable crafts, gardening workshops, farm to table food preparation, Circus Camp activities, moon jumps, a musical instrument petting zoo and much more. For all the jokesters, the 420 Comedy Tent will return with live comedy shows and improv workshops throughout the weekend—family-friendly during the day, with adult entertainment starting after the sun goes down.

Plus, 420 Fest is bringing back a handful of fresh experiences that made their debut in 2013. Beer fans unite! The SweetWater Experience returns as a weekend long craft beer-centric event, presented by SweetWater, filled with expert panel presentations, dozens of specialty brews and a look into the culture and history behind the brewery. Last year’s Silent Disco will change it up a bit this run, returning as a new Not So Silent Disco stage chockfull of DJs from around the nation.

SweetWater Brewing Company is an AtlantaÔÇÉbased craft brewery living by the motto “Don’t Float the Mainstream!” Distribution is limited to the Southeast as SweetWater’s brews are designed to be consumed fresh. The awardÔÇÉwinning lineup of yearÔÇÉround beers includes SweetWater 420, IPA, Blue, LowRYEder and Georgia Brown. SweetWater also features a Catch and Release series of beers available on a limited basis throughout the year, and an experimental, oneÔÇÉtimeÔÇÉonly Dank Tank series. SweetWater Brewery — located at 195 Ottley Dr. in Atlanta — is open for tours every Wednesday, Thursday and Friday from 5:30ÔÇÉ7:30 p.m., as well as Saturdays and Sundays from 2:30ÔÇÉ4:30 p.m. For more information about SweetWater Brewing Company, please visit www.sweetwaterbrew.com. Hang out with your social thang out and follow SweetWater Brewing Company on Twitter/Instagram @sweetwaterbrew, or become a fan on Facebook atfacebook.com/sweetwaterbrew.