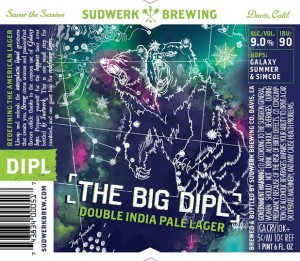 DAVIS, Calif. — Sudwerk Brewing Co. is shooting for the stars with its newest beer, a Double India Pale Lager dubbed THE BIG DIPL.

THE BIG DIPL will debut on draft and in 22-ounce bottles at a free, space-themed event, from 4-8 p.m. on Friday, May 16, at The Sudwerk Dock Store, 2001 Second St., Davis. A portion of the proceeds will go toward Davis High School’s Science, Technology, Engineering and Math programs. The launch features space music from local disc jockey Nate Frog and, inside the brewery, an episode from the 1970s Carl Sagan TV series “Cosmos.”

Sudwerk Brewing Co. continues to redefine the American Lager, and this bold brew is a super nova of hop bitterness and aroma. It showcases the coveted Galaxy hops, a hard-to-find variety from New Zealand that combines the tang of grapefruit, melon and passion fruit. IPA fans will enjoy this highly aromatic, intensely flavorful lager, colliding on the palate for the hoppiest beer ever bottled by Sudwerk.

Sudwerk co-owner Trent Yackzan said, “We’ve been experimenting with Galaxy hops over the past year, and our brewers are really excited to finally release this beer. It’s a flavor profile that you don’t often taste in the Sacramento region.”

Beyond the Galaxy, the UC Davis-trained brewers added Simcoe and Summer hops, topped off with two rounds of dry hopping. It orbits at 9 percent alcohol by volume and 90 IBUs. Because of the higher alcohol content, the taproom will serve it in 13-ounce pours instead of pints.

THE BIG DIPL’s label unleashes a double-headed California bear, surrounded by hop invaders. The Big Dipper is part of the Great Bear constellation, Ursa Major. T-shirts featuring the intergalactic lager’s label will be available at the taproom.

For details on this and other Sudwerk Brewing Co. events, visit http://sudwerkbrew.com.