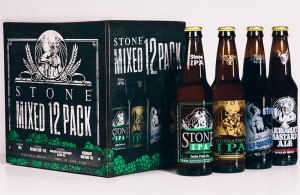 This is the first time these four beers have been included in one case box, but that’s not the only historically significant aspect of the pack. For the first time ever, Arrogant Bastard Ale will be sold in 12-ounce bottles, as opposed to the 22-ounce bottles that have housed this belligerently bold American strong ale for the past 16 years. Although it’s tough to imagine this much liquid arrogance fitting inside a more diminutive bottle, the craft beer company has made it a reality via the Stone Mixed 12 Pack.

“We’re thrilled to be releasing the Stone Mixed 12 Pack to our fans nationwide,” said Vice President of Sales Todd Karnig. “We released a variation of the mixed pack in California late last year. It was enormously popular and we received positive feedback from our loyal fans and retailers. This 12 pack is perfect for the craft beer fan who wants to enjoy something special, but can’t decide on just one of our many delicious beers.”

Whether it’s a long-time favorite or a beer that hasn’t been tried before, the Stone Mixed 12 Pack offers what beer enthusiasts love: choice. It’s also a great option when faced with entertaining guests with varying palates and preferences.

Moving forward, Stone will continue shuffling the selection of beers included in the Stone Mixed 12 Pack, and fans are advised to stay tuned for future editions.