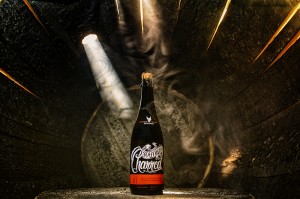 ESCONDIDO, CA (Nov. 4, 2013) — It’s a special time of year when a Bastard comes out to play. It’s even more special when two Bastards come out from hiding and treat fans to a taste of what it is to be Worthy. Today, Double Bastard Ale and a barrel-aged version of the beer, Southern Charred, are migrating across the U.S., seeking those that welcome their company.

Double Bastard Ale was first released November 1998 to honor the one-year anniversary of Arrogant Bastard Ale. The beer debuted as the amped-up evil uncle of its already aggressive predecessor. The bottle warns, “Double Bastard Ale is not to be wasted on the tentative or weak. Only the Worthy are invited, and then only at your own risk.” It goes on, “This is one lacerative muther of an ale.” Since 1998, Double Bastard Ale has been released once a year to Worthy individuals seeking its company.

Fans looking for an alternative to the annual cult favorite, Double Bastard Ale, might find Southern Charred more suitable for leisurely quaffing. Resting in a sleek black 500ml bottle, the beer was aged for 10 months in heavily charred Kentucky bourbon and American oak barrels, then transferred to second-use Kentucky bourbon barrels to age for an additional 13 months. The dark amber ale was brewed with a huge malt bill and a belligerent amount of hops making it a heavy, bitter beast of a beer.

Southern Charred is part of Stone’s coveted Quingenti Millilitre Series and releasing in conjunction with two other bold and fiery beers — Crime and Punishment. Previously, Stone Quingenti Millilitre Series bottles were only available at special events and Stone Company Stores across Southern California. However, the release of Southern Charred, Crime and Punishment marks the first time these bottles have made a national debut.

Double Bastard Ale is ready to drink fresh or may be cellared for months or years, allowing the beer to mature and flavors to strengthen. Southern Charred may also be enjoyed now or if properly cellared, will continue to develop strong bourbon notes as the smoke flavor lessens.